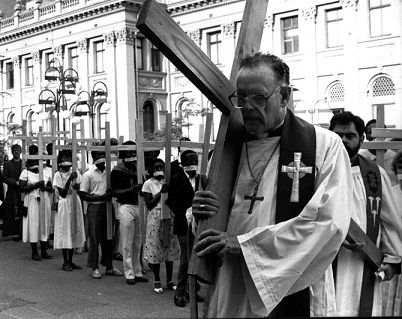 Provident and wise Creator, As your mighty plan unfurled, You made us to share your labour, In the building of the world… With these words – written by Archbishop Hurley himself to the tune of Beethoven’s ‘Ode to Joy’ – the centenary celebrations for this great Oblate and renowned Son of Africa came to a resounding end. Denis HURLEY – for 45 years Archbishop of Durban and the ‘scourge of Apartheid’ – was born on 9 November 1915 and so it was fitting to mark 100 years since his birth with a whole weekend of events. And his heritage as an Oblate – Hurley was a member of the OMI’s for over 70 years – was a key element in the celebrations. 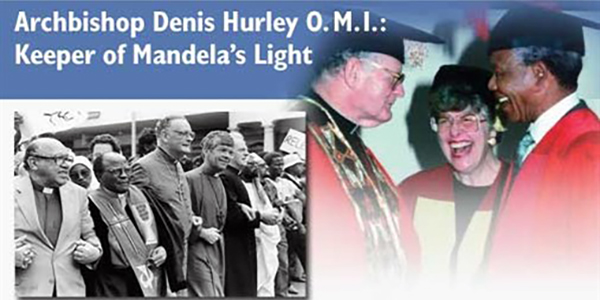 Archbishop Hurley stands out as a towering figure – literally, he was 6’3” – in the Church in South Africa and 11 years after his death he continues to be an influential force. This is partly because of his pioneering role in fighting for justice and being a voice for the voiceless, in his time, in the Struggle against Apartheid. Pope Francis recognised this in a personal message sent for the Centenary. His current challenge to us all to be a Church for the Poor is one that Hurley epitomised in his own life and ministry, both at the political level, campaigning for those suffering injustice, but also at the personal and pastoral level. As a bishop and in his retirement years, he always had time for the most marginalised.

That is why the enduring gift to him for his 100th birthday was the official opening of the Denis Hurley Centre, a welcoming place in the heart of Durban where the unemployed, homeless, refugees, drug users and the sick find practical help and support. The nearly £2 million needed to build the centre came in part from collections through the Denis Hurley Association in the UK and the Oblate Parish at Sacred Heart Church, Quex Road, London. Their contribution, and that of many other overseas and South African donors, was acknowledged by Cardinal Wilfrid Napier, current Archbishop of Durban, during the opening blessing. Also recognised was the significant contribution by the Irish Government (the Ambassador was present) and by the South African government (the Premier of the Province, the Mayor of the City and a senior cabinet minister all had a role in the centenary celebrations) The Hurley Centenary was not just for Catholics but for the whole of South African society and this was evidenced by the extensive coverage in the Durban papers (3 front page stories!), a feature on the national nightly TV news, and the many articles reflecting on what Hurley meant for South Africa today. If pride can be allowed, all Catholics and especially the Oblate family, had a reason to feel proud of the association with Hurley. 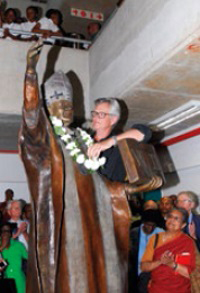 The weekend began with a lecture given by Monsignor Paul Nadal, Hurley’s Vicar General. He reflected especially on the years after the Second Vatican Council at which Hurley had himself been an influential figure. Mgr. Nadal – a keen cyclist, walker and runner who in his 70’s and 80’s has raised tens of thousands of pounds for the Denis Hurley Centre – pointed out that Hurley was not just a visionary but a strategist who made sure the vision of the Council was implemented in practice. The key role of lay people in building and running the Denis Hurley Centre is evidence that this continues today. Hurley’s commitment to ecumenism and to interfaith relations was recognised in a book launch and a workshop led in part by theologians from St. Joseph’s in Cedara, the Oblate scholasticate near Durban. The fact that Christian and Muslim volunteers are working side by side at the Centre to feed the homeless was seen as an example to the world of how faith can bring people together rather than setting them in conflict with one another. Cedara was also present in force when 30 Oblate students from across Africa joined the Provincial, Fr Vusi MAZIBUKO, and Oblate young and old at a special Mass at the Cathedral. Bishop Barry WOOD, the auxiliary bishop of Durban, presided at another of the Masses and other bishops, Anglican and Methodist bishops, and heads of male and female religious congregations all played a role in various events. At the official opening all the religious leaders – Christian and non-Christian – stood together to give a silent blessing to the staff and volunteers who work at the Denis Hurley Centre.

The events culminated in a grand orchestral concert with a 50-strong orchestra, choirs of 80 singers, Tibetan and Zulu drummers, and renowned local soloists in a programme that brought together music from the world’s major religions. Hearing the Muslim call to prayer inside the Cathedral or the haunting oboe melody from the movie, ‘The Mission’, touched the hearts of all present. In honour of the Oblate devotion to Our Lady, a special violin and harp arrangement of ‘Ave Maria’ was also featured. The final word on the centenary should go to Fr John PATTERSON who at 92 is a near contemporary of Hurley. With tears in his eyes, he said that Hurley’s life was all about love and helping other people to love; he felt the Centenary had helped us to do just that.
(Raymond Perrier in Oblate Connections, December 2015)

Justice for Catholic schools
Congratulations from the Pope for the bicentenary