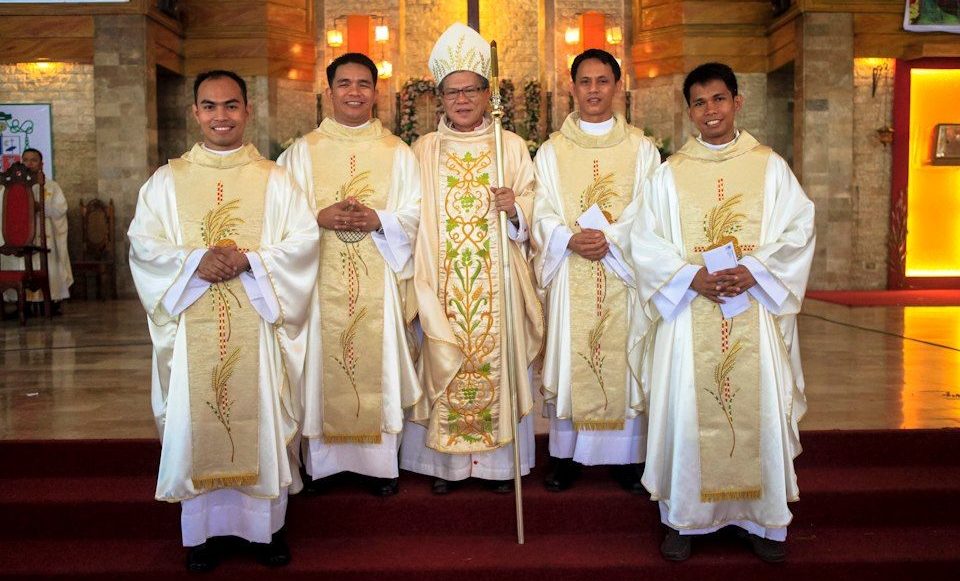 To be a bishop in the crosshairs

On February 17, 2016, Bishop Angelito R. LAMPON will mark his 18th year as Bishop of the Apostolic Vicariate of Jolo. He served as Provincial Superior in 1988 but his second term was cut short in 1992 when he was elected General Councillor for the Asia-Oceania Region.

Towards the end of his first term as General Councillor, on February 4, 1997, Bishop Benjamin DE JESUS, the Bishop of Jolo was gunned down. The vacuum that he left as a simple, peace loving Oblate resounded among the laity, both Christians and non-Christians, in the Vicariate.

When Fr. Angelito returned to Rome in November 1997 from a meeting in San Antonio, Texas, the Superior General, Fr. Marcello ZAGO told him, “Lito, the Vatican has been looking for you for two weeks!” Fr. Lito went to the Congregation for the Evangelization of Peoples the next day. After a cordial greeting, Archbishop Joseph Uhac, Secretary of the Congregation, told him: “The Holy Father has appointed you as Bishop of Jolo, do you accept it?” His immediate reply was, “No, if they killed Bishop Ben de Jesus who was a good man, they will also kill me, if not in two weeks maybe in two years.” Archbishop Uhac’s reply was very candid “Yes, I understand. This is a call to martyrdom.” But he added, “Please hurry up with your decision. With ailing health, the Pope only ordains bishops in Rome on January 6, the Feast of the Epiphany.”

After several days of anguished discernment, on December 6, Fr. Lito accepted the Holy Father’s appointment. The announcement was made over Vatican Radio and Radio Veritas on December 8, the feast of the Oblate Patroness, Our Lady of the Immaculate Conception. He believed that, “God’s plan is always the best.”

The bishop describes the mission in the Apostolic Vicariate of Jolo (AVJ): The AVJ is like a big parish. We have a Cathedral and the rest are chapels. It is not difficult to run administratively. I have no problems with my priests – fifteen Oblates and two diocesans. They are my source of joy. They live a simple lifestyle. They are zealous and committed to their mission. Transportation and distances are part of the difficulty. It takes at least 4 to 5 hours from Jolo to the nearest island of Siasi. Then 8 to 10 hours to Bongao. Cagayan de Mapun is the farthest parish. In good weather, the trip takes 24 hours in open sea aboard a wooden “lantsa;” In bad weather, 48 hours or an eternity. In the past 17 years, Bishop Lito recalled, three vessels sank and disappeared. Going in and going out of Mapun, one always risks one’s life.

Mobility is the primary challenge faced by missionaries because of security. We are heavily guarded by the military and this creates a vestige of counter witness. However, after the murder of Bishop Ben, Fr. Benjie INOCENCIO (†2000) and Fr. Rey RODA (†2008) and several of our Lay Leaders, we are forced to have military security. Home visitation is not easy to do anymore. We still bring Holy Communion to about 30 sick and elderly parishioners every First Friday of the month but always with two Marine escorts and the bishop as the driver.

Interreligious Dialogue is a big challenge. We have many Muslim friends, especially those who studied at our Notre Dame Schools or are beneficiaries of our housing projects but there are certain radical groups who are anti-Christian. Once, while driving home from a 5:00 p.m. Mass from Asturias Chapel, two men in their mid-30’s stopped and spat on the ground before me. But this is not really new to me. In my 17 years as bishop of Jolo, a hand grenade was thrown into the Cathedral of Jolo seven times. There were some structural damage but, there were no casualties. The protection of Our Lady of Mount Carmel, Patroness of the Cathedral remains with us.

The quality of life of each Oblate affects people and the Church as a whole. We live a simple life. We do not have luxurious cars. In the islands of Tawi-tawi, we paddle our own canoe and take motorized public boats. Our schedule is dictated by the high or low tides. We try to serve the poorest of the poor. The patrimony of the Vicariate is the patrimony of the poor.

To cap it all, the bishop added: “Accipe Oblationem Meam” (Accept Lord my offering) is my episcopal motto – Oblate, oblation, offering. To be a missionary then means to be present where life is most threatened. Courage in Sulu and Tawi-Tawi does not mean an absence of fear but rather a conviction that there is SOMETHING more important at stake than our individual fear; and that “SOMETHING” is the Mission of Jesus Christ and His Church.
(Abridged from OMI Philippines, December 2015)

Letter of the Superior General to the Congregation for February 17, 2016
Statistics 2016