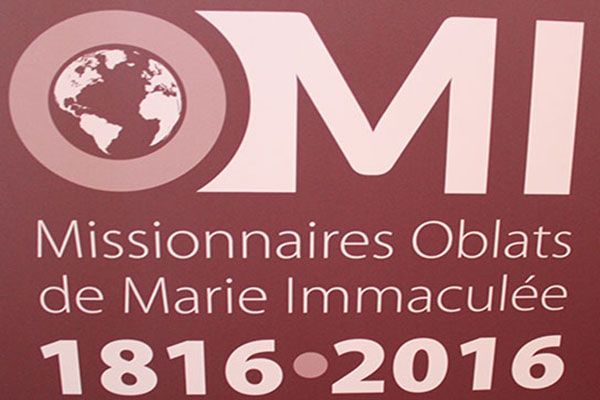 On the occasion of the 200th anniversary of the founding of the Oblates, Bishop Douglas CROSBY, President of the Canadian Conference of Catholic Bishops and also an Oblate, wrote a letter of congratulations to Fr. Luc TARDIF, provincial of the Province of Notre-Dame-du-Cap:

On the occasion of the 200th anniversary of the foundation of the Missionary Oblates of Mary Immaculate, the Canadian Conference of Catholic Bishops joins the universal Church in offering joyful thanksgiving to God. When Father Eugene de Mazenod and Father Henri Paul Tempier shared their vows as Oblates of Provence on Holy Thursday, April 11, 1816, they had no idea where the Spirit of God was leading them and their young community. Two hundred years later, about 4000 Oblates serve in 69 countries worldwide! Despite a reduction over the past several years from even higher numbers, the community is still a strong missionary presence in the Catholic Church.

Arriving in Canada in 1841, at the request of Bishop Ignace Bourget of Montreal, the Oblates began an important era of evangelization for the country, most especially during the “opening” of the West. The Oblates worked closely with Indigenous Peoples, learning their many languages, and preparing dictionaries and grammars, assuring that some of these languages would survive the arrival of European settlers and continue into our time. As missionaries, Oblates priests and brothers were not afraid to travel to the more remote communities in the northern parts of the country, often giving their lives for the people entrusted to their care. Names of Oblate missionaries are given to cities, towns, parks and streets across the country.

Many religious institutions established by Oblate missionaries over the years endure, among them the University of Ottawa and Saint Paul University; the Shrine of Our Lady of the Cape in Cap-de-la-Madeleine, Quebec; Queen of Apostles Renewal Centre in Mississauga, Ontario; and many parish churches in Canada, including several cathedrals! Even the skidoo was conceived by an Oblate!

Similar to the situation of other religious communities, the Oblates face many challenges in this new millennium. Undaunted, they look to the future, undertaking new initiatives, always desiring to serve the Church with creative energy, pastoral enthusiasm, and missionary daring!

Praise God for the 200th anniversary of this great missionary community in the Church! As we conclude this special Year for Consecrated Life, may the Oblates know of the admiration and gratitude of the entire Church in Canada, and accept her prayers for continued rich blessings into the future.

Specialists in a most difficult mission
Helping the widows