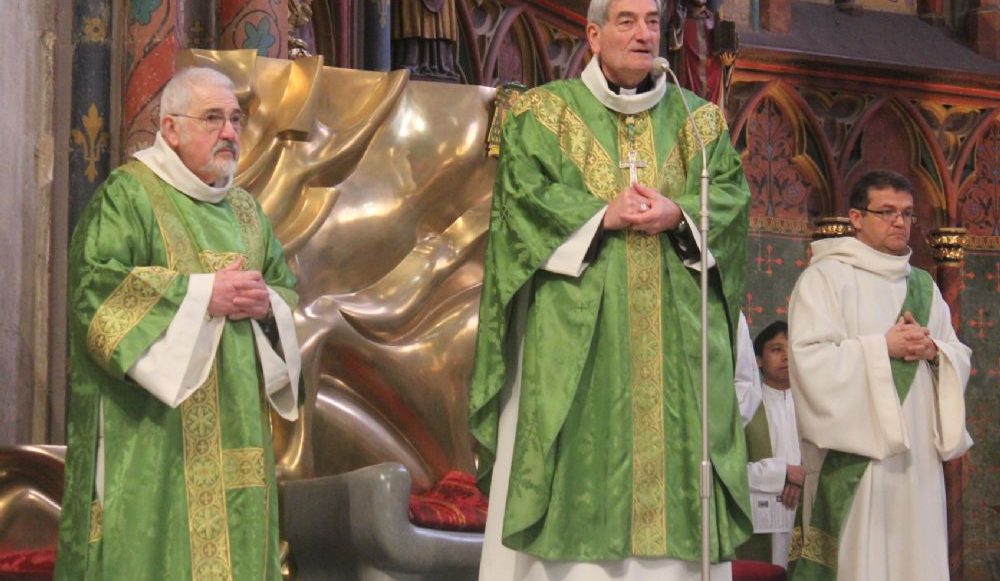 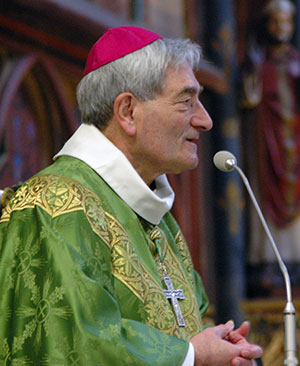 During the Mass for the Oblate Jubilee celebrated on 24 January 2016, in the Saint-Sauveur Cathedral in Aix, Archbishop Christophe Dufour preached the following homily.

“The Holy Spirit has sent me to bring the Good News to the Poor.” This Sunday’s gospel gives us the road map of Christ’s mission: to bring to the poor the Good News of the love of God, His Father. But this road map inspired a young priest of our diocese of Aix, born on Cours Mirabeau, to choose these words as the motto for the community of Missionaries of Provence which he founded: “The poor have been evangelized.” The liturgical calendar by chance has done well in offering us this motto borrowed from Luke’s gospel which we have proclaimed today with the entire Church. On this day when we are celebrating the 200 years since the founding of the community of the Missionaries of Provence, which would later become the Oblates of Mary Immaculate, I will speak to you about evangelization.

Together with Popes John Paul II, Benedict XVI and Francis, we speak today about a new evangelization. In the synagogue at Nazareth, Christ gave us the program: proclaim the Gospel to the poor, a Gospel of liberation of captives and the oppressed, a Gospel of light for the blind. Proclaim a year of favor offered by God Himself.

Evangelization, new evangelization: Saint Eugene de Mazenod is here as one of our teachers. I will ask him to comment on this double proclamation of the Good News to the poor and a year of favor granted by the Lord.

Proclaim the Gospel to the poor. How did Eugene, this son of the rich, who loved money and luxury – he had promised to marry a woman who had money! – how was he able to choose this fundamental orientation for his life: to go and bring the Gospel to the poor? He would tell us: “Because Christ himself called me.” Christ called him, a bit like the apostle Paul, as he gazed upon the Cross one Good Friday in the church of the Madeleine, in 1808. It was because Saint Eugene, beneath his superior airs, his desire to be pleasing in the eyes of the world, has a sort of poverty, a wound. Because he himself was poor, he was able to accept the Gospel and live a real encounter with Christ. Because he was poor, Christ went to him. For Saint Eugene de Mazenod, this was a new evangelization. He was baptized, a traditional Catholic; he went to Mass, but he had not lived a real encounter with Christ. The Christian message had stayed on the surface; it had not penetrated his soul so as to convert him and change his life. And so, before the Cross, he recognized his own poverty and Christ took hold of him.

And Eugene de Mazenod allowed himself be led to the poor.

First of all the prisoners, with the ministry of prisons founded two centuries before him, a ministry still alive today in Aix-en-Provence.

Then the jobless youth in front of the Palace of Justice, with whom he would found the Association of Christian Youth in April 1813.

He would also start a group for the chimney sweeps and a group for young soldiers… He had the charism of a founder – it’s surely for that, that Christ called him! He was completely motivated by this passion for the Gospel, a passion that led him to deeply revitalize evangelization by going to the poorest of the poor. I quote him: “You who are poor, come! I want to make my voice heard to the farthest corners of the world so as to summon all of you. I am going to begin by teaching you who you are, your origin, your dignity, your rights. Poor ones of Jesus Christ, distressed, unhappy, suffering, infirm, sick, all of you whom misery overwhelms, you whom the world rejects, you my brothers, my dear brothers, my respectable brothers, listen to me. You are the children of God. You are the brothers of Jesus Christ. You are the heirs to his kingdom; you are the ones he has chosen and whom he prefers.” (Sermon in the Church of the Madeleine in Aix, Ash Wednesday, March 1813)

There it is: the road map for the new evangelization. Pope Francis would sign on to it for he wants “a Church that is poor and for the poor.” 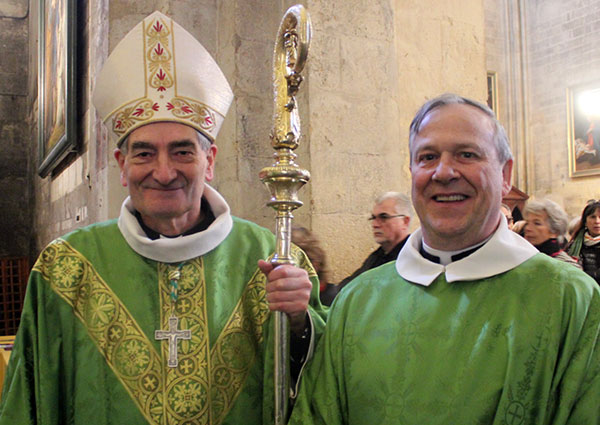 Proclaim a year of favor offered by the Lord. A year of favors, of benefits, of mercy, of pardon, of reconciliation.

In “The Joy of the Gospel,” Pope Francis has invited all the Catholics of the world to a missionary conversion so that they might become missionary-disciples. Not just disciples of Jesus, but missionary-disciples. For there cannot be disciples who are not at the same time missionaries. A disciple who is not a missionary is not a true disciple. In a text of Eugene de Mazenod, one thing caught my attention. It’s the letter he wrote to the Chapter of vicars general to ask for permission to found a community with some priests of the diocese; he wrote that in bringing the Gospel to the poor, Christ gave a proof that he was the Son of God. Pope Francis adds: in the same way that Jesus proved that he was sent by the Father by bringing the Gospel and the love of God to the poor, so too the disciple, as a missionary, will prove to Christ that he is an authentic disciple.

After “The Joy of the Gospel,” Pope Francis announced a Holy Year of Mercy. A year of favor. He shares his conviction that the reception of divine mercy is a necessity, a prerequisite to any missionary renewal. Here too the missionary experience of Saint Eugene de Mazenod should be recalled.

First, the rule of his community makes a requirement for the missionaries: between each mission, they were to get together for a time of fraternal life, of prayer and sharing, of reconciliation and mutual forgiveness.

Then there’s confession. The missionaries would bring with them four portable confessionals. Eugene relates in his journal of the mission at Grans: “No one was making the Easter duty… soon one would have to close the church, so little was it used… Everything changed that first week: from 3 in the morning, the penitents crowded around the confessionals… We stayed there for as long as 28 hours without stopping.”

Finally there was the role of reconciliation. The Revolution had produced hatred in the villages. The mission was a sort of jubilee of mercy. Eugene preached reconciliation: “It is not possible to live together in the parish if we are not reconciled.” It was proposed to those who hated one another to come forward under the cross, before the altar, and to talk, with the missionary as the sole witness.

There can be no successful mission without reconciliation. Pope Francis tells us that again. After calling us to be missionary-disciples, he calls upon us to reconcile with one another by accepting the gift that is above every gift, pardon, whose source is the divine mercy.

“It’s time,” says Pope Francis, after the manner of the prophets. It’s time for two reasons. 1.) As if he could foresee a catastrophe as he looked upon the violence that plagues the world, he states his Christian belief that only God’s mercy can cure mankind of this illness. 2.) It’s time “for the testimony given by believers to be stronger and more effective.”

Through the intercession of Saint Eugene de Mazenod, let us ask for the grace to see ourselves as poor, to accept the divine mercy and to be its witnesses, so that the Good News might be proclaimed to the poor. Amen.