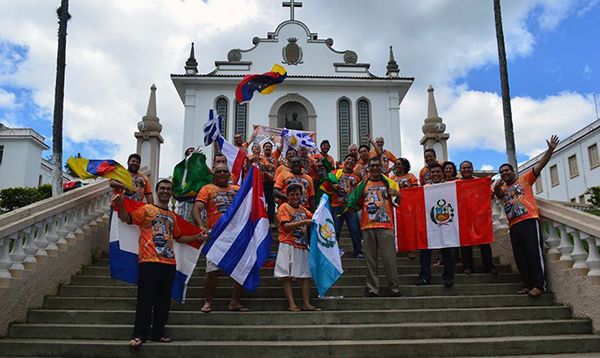 Oblates from Latin America share their faith experience on justice, peace and the integrity of creation

The OMI 1982 Constitutions and Rules made a point to introduce the ministry of Justice, Peace and Integrity of Creation as a main preoccupation of its members. It is good to remember this as we go through the third year of the Oblate Triennium. This ministry cannot be absent from our missionary activity. I hope that sharing our experience in Latin America will help other Oblates in their desire to serve the poor wherever we are.

The economic and social policies in the long Latin American colonial period in Latin America were meant to keep the poor people under the rule of the governing class. Economic and social tragedies were not lacking. These policies affected in depth the poor and the most abandoned in the region. Unspeakable torture and deaths have occurred everywhere, but especially in the countries of Central America and Brazil, Argentina, Uruguay and Chile, the so-called “southern cone” of high material wealth. And this happened in a supposedly Catholic continent.

The Oblates working in Latin America shared the lot of the poor; its pastoral work suffered a turn-about of 360 degrees following the II Vatican Council. The Church was with the poor, even if some bishops were not interested in speaking out in their favor. Many bishops were exemplary shepherds, like Bishop Helder Camara of Recife, Brazil. No suffering was lacking.

Oblates in Bolivia, Chile, Brazil and Argentina shared the lot of imprisoned Christians. A large number of religious men and women were persecuted by military regimes at the service of foreign capital. Moved by Gospel values some of them decided to join “guerrilla movements” so common in the continent in the 70’s and 80’s.

Important aspects of the Oblate charism motivated the Oblates in those difficult times: the love of Jesus Christ, the love of the poor and the love of the Church, “that glorious inheritance purchased by Christ the Saviour at the cost of his own blood”. Committed to Jesus and to the Church, Oblate missionaries preached the Gospel values in the language of the poor. Such was the Oblate missionary novelty: being close to the poor. The socio-economic conditions of the lower and working classes were inhumane and the Oblates shared their lot. We have learned this from Saint Eugene’s famous sermon at the Magdalene Church in Aix-en-Provence. The Founder was a witness of all those inhumane conditions of the poor. The current world conditions are not different from those.

The Oblates today are present in 14 countries in Latin America. St. Eugene used to say that the Congregation was small, but it would be great if it were holy and faithful to its charism and to the inspiration of the Holy Spirit. If one asks Oblates whether justice and peace ministry is central to their evangelization, they will have no doubts. They will say that without justice and peace, the Oblate charism is not being lived as St. Eugene established it.

In the Amazon region, Oblates care for the native peoples who have left their villages and are now living in the big city of Manaus. The poor are searching for better living conditions in the big city which is the scene of an ecological tragedy. The Amazon region is a recurring theme in whatever meeting or seminar where the environment is discussed. The governments of both Brazil and Peru have discussed the possibility of a railway starting in western Brazil and heading towards the Pacific Ocean, cutting across native people’s forest areas; many of these native people have hardly any contact with the white man.

In Peru the Oblates work in the Napo River valley, building Christian Basic Communities, and are facing serious problems related to mining and exploration of the environment’s riches.

The Oblates in Bolivia are supporting the silver mine workers in defense of their rights. They also are very involved in contributing to the promotion of cultures and traditions of the Andean peoples.

The Oblates in Paraguay are dedicating themselves to the Guarani people and their centuries old traditions.

Chile suffered a traumatic experience due to a “coup d’état” that assassinated President Allende and hundreds of other innocent people as the military tried to implement economic and political policies amidst a bloody dictatorship. Many Oblates were forced to leave the country. The same happened in several Latin American countries.

Throughout the continent Oblates contributed to an evangelical understanding of devotional traditions built over the colonial years. The Oblates did not forget to engage themselves in the adventure of bettering the socio-economic conditions of the poor they served. In some countries they have built professional schools seeking to better the people’s qualifications in different professions.

The Oblates understand that Justice, Peace and Integrity of Creation are a pastoral ministry that permeates all other ministries in which they are involved. A word used for this is “transversal”; in other words, Oblate ministry fails if it does not touch upon the material conditions under which the poor and the most abandoned struggle. In large urban centers of the continent, the Oblates are contributing to the integral liberation of the people to whom they are sent. They try to help the community leadership to understand that justice and peace issues are an integral part of the proclamation of the Kingdom of God. This is not always easy, for previous Christian formation was quite “spiritual”. Faith and social commitment did not always walk together across the continent.

Oblates have contributed to establish “Human Rights Defense Centers” on the continent, as something fundamental in missionary ministry. St. Eugene taught Oblates to be parochial mission preachers, aiming at bringing the listeners to act as human beings first, then as Christians, to finally to become saints. Such has been the goal of the Oblates in this continent where one strives to be faithful to the charism of the Congregation. This requires constant revision of objectives and strategies in order to root Jesus’ Kingdom values in the lives of people and society where economic and social inequalities abound. These at times seem to be insurmountable in spite of much effort and good intentions.

It must be mentioned that the Oblates have made many efforts in training young people who are thinking of joining Oblate Life. The houses of formation are always located on the outskirts of large cities so that young Oblates would have a clear idea regarding what social class they are preparing themselves to serve as Missionary Oblates. They have the challenge of transmitting in simple words what they have learned so that people may have access to the richness of the Gospel message and its understanding. Oblates are always evaluating their pastoral experiences and adapting themselves to the ever changeable conditions of the times. This is no easy task.

The journey of the Oblates on the Latin American Continent went through several contradictory experiences and has encountered also several attractive ideologies. These shaped and transformed Oblates way of being and acting. The contribution of impoverished people was vital to them in their challenge to contributing and improving the living conditions of the poor. In view of the calls of past General Chapters, Oblates have emphasized the role of the laity in the Oblate ministry regarding Justice, Peace and Integrity of Creation.