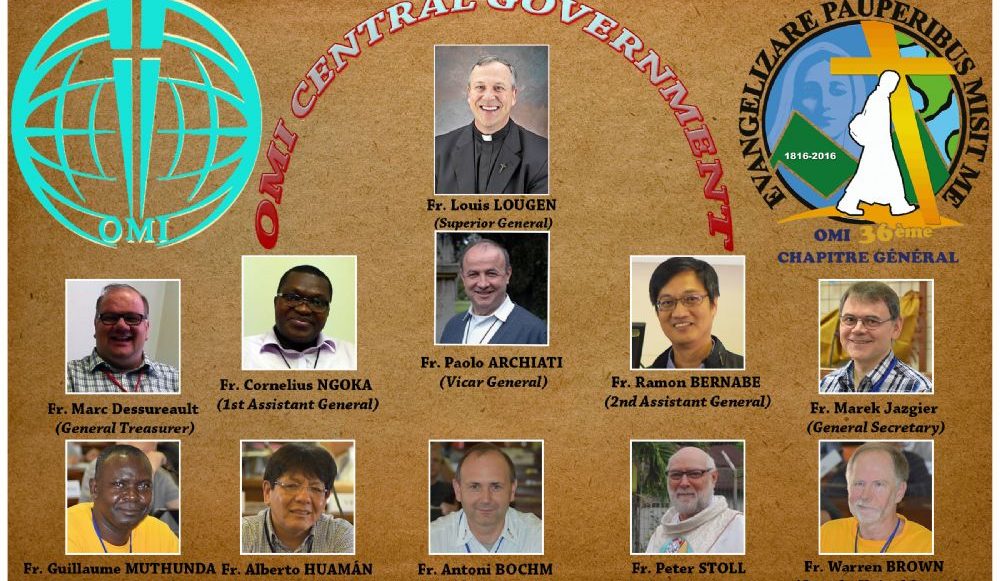 Before they settled into a long day of discussing and amending various documents, a normal part of the work of a General Chapter, the capitulars were joined in spirit by the community of the St. Eugene de Mazenod Scholasticate in Kinshasa, Democratic Republic of Congo, for Morning Prayer.

Here is a brief introduction to the newly elected General Councillors:

The new General Councillor is Fr. Guillaume MUTHUNDA HENGELELA, from the Province of Congo, currently serving as Treasurer in the Angola Mission. Born in the Democratic Republic of Congo in 1967, he pronounced his first vows as an Oblate in 1989 and was ordained a priest in 1994. His ministries have included parish work in both Congo and Angola, formation and teaching in the scholasticate and superior of the Angola Mission (2009-15). He speaks French, Portuguese and English. 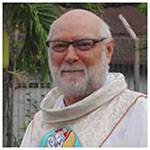 The Chapter elected Fr. Peter STOLL, an Australia-born missionary in Indonesia for over 30 years. He accepted his election over the telephone. Born in 1953, he pronounced his first vows in 1973 and was ordained to the priesthood in 1978. He became a citizen of Indonesia where he has served in a variety of ministries including parish work and formation. He was also secretary for the Asia-Oceania Region for several years. At the time of his election, he was a member of the provincial council of his province and pastor of a parish. 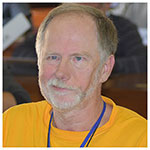 Fr. Warren BROWN has been elected to a second term as General Councillor. He was born in Fort Worth, Texas USA, in1955 and made his first profession of vows in 1978. After his ordination in 1982, he spent ten years in parish ministry. He has a doctorate in Canon Law from St. Paul University in Ottawa and has served on the Marriage Tribunal of several dioceses. He has also been active in the ministry of Justice, Peace and the Integrity of Creation. From 1995 until 2010, he taught Canon Law at Oblate School of Theology in San Antonio, Texas and he was also the Vice-President of that institution. He serves as chairman of the Association of Oblate Institutes of Higher Studies mandated by the Chapter of 2004. He speaks English, French and Spanish. 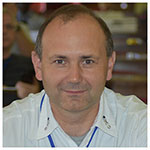 Newly elected General Councillor Fr. Antoni BOCHM was the Provincial of his native Poland prior to his election by the General Chapter. He was born in 1969 and professed his first vows as an Oblate in 1993; ordination to the priesthood was in 1999. He served as a parish priest for two years before pursuing higher studies to prepare him for formation ministry at the scholasticate in Obra. There, he served as spiritual director and professor, as well as superior until he became provincial in 2014. He speaks Polish, English and Italian. 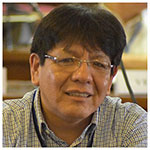 Born in Peru in 1970, Fr. Alberto HUAMÁN CAMAYO is the new General Councillor for the vast continent of Latin America, as well as the Caribbean country of Haiti. He pronounced his first vows in 1997 and was ordained a priest in 2001. His ministry has included various parish assignments and superior of the BOLPER scholasticate in Cochabamba, Bolivia. While in Bolivia, he also worked in prison ministry and as a professor. Back in his native Peru, he was Treasurer of the Delegation and, until his election, he was a member of the General Finance Committee as well as Superior of the General Delegation of Peru. He speaks Spanish, English and Italian.