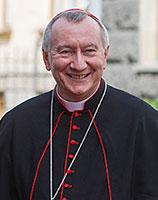 During his visit to Ukraine at the end of June, Cardinal Pietro Parolin, the Vatican’s Secretary of State, visited the eastern parts of Ukraine and brought aid from Pope Francis to the victims of war. He also desired to meet the poor of Kiev who are cared for by the Missionary Oblates of Mary Immaculate.

Cardinal Parolin addressed the poor, greeting them on behalf of the Pope and ensuring his solidarity with those who personally experience poverty, homelessness and the essentials of life, something all too common for the majority of people there. He thanked the Missionary Oblates who serve the poor.

After the blessing, Oblate Brother Sebastian JANKOWSKI, who, together with volunteers, works directly with the poor and homeless, invited them to the church yard where food and clothing were made available.