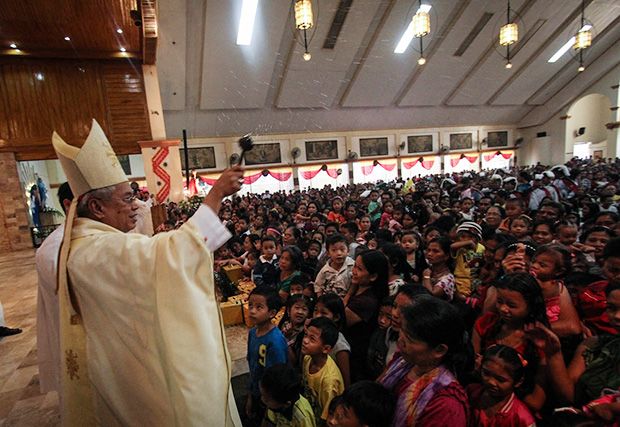 “A crime that cries to heaven”

While the Oblate parish of Santo Niño in Midsayap, on the island of Mindanao, was celebrating the birth of the Prince of Peace, eighteen people, including a police officer, were wounded when a grenade exploded outside of the church.

Fr. Jay VIRADOR said that the faithful inside the church did not wait for the rites of conclusion of the Mass. The quickly left the church to find safety elsewhere.

Initial suspicion focused on Islamic or communist elements who have been known for similar attacks in the past, but further investigation seemed to point to criminals linked to drug cartels and traffickers. The grenade exploded near a police car, perhaps as a message to the police to back off from the government’s war on the illegal drug trade.

Cardinal Orlando QUEVEDO, the Archbishop of Cotabato, called the grenade attack on this parish in his diocese “a crime that cries to heaven.”

Acts such as this “will not stop the peace process in the southern Philippines, nor will they manage to cause a rift between groups working on negotiations with the Philippine government, which is proceeding along a resolute path of mediation and reconciliation,” Cardinal Quevedo said in a statement to  Vatican Insider.

Acts of the 36th General Chapter
Books for poor children