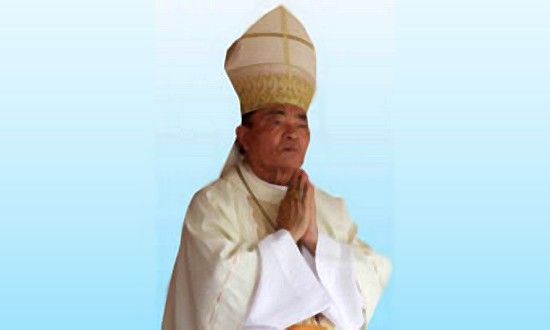 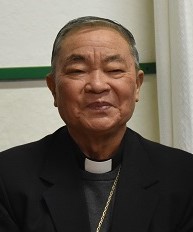 Vatican Bulletin, 2 February 2017: The Holy Father Francis has accepted the resignation from the pastoral governance of the Vicariate Apostolic of Vientiane (Laos), presented by Bishop Jean KHAMSÉ VITHAVONG, O.M.I.

Jean Khamsé was born on 18 October 1942 at Kingsadok, the oldest Christian village in northern Laos, established in 1888. About 1955, he began his secondary studies at the Collège de Mazenod in Paksane. Since he was a good student, in 1959 he was sent to the juniorate in Pontmain, France. In 1963, he was a novice at La Bross-Montceaux. After his first vows in September 1964, he did his philosophy studies at the scholasticate of Solignac.

In 1966-68, he was back in Laos for a pastoral internship; his superiors decided that he would continue his studies in the Philippines. After a year of English, he studied theology at the Ateneo de Manila, run by the Jesuits (1969-73). He made his perpetual profession in 1971. After a period as a deacon in Laos, he was ordained a priest in his village of Kengsadok on 25 January 1975. But soon after, there would be the definitive departure of the Oblate bishops who were replaced in 1975 by Bishop Thomas Nantha. By December of the same year, the communist authorities were firmly established. That would be the case for the entire priestly life of Jean Khamsé.

Little by little, the country was closed off from the outside, making communications impossible, except for rare travelers who acted as intermediaries. On 19 November 1982, the Holy See named Jean the coadjutor of Bishop Nantha. The Nuncio, Renato Martino, arrived all of a sudden on 15 January 1983, but in Laos, no news of the appointment had leaked out. On 16 January, Jean was quickly ordained a bishop in the presence of a few people. He was 41 years old. When the OMI Superior General offered him help, he asked for a bishop’s cassock and a bike.

Bishop Nantha died on 7 April 1984. Jean Khamsé succeeded him as Vicar Apostolic of Vientiane. He was also (until 1999) the Apostolic Administrator of Louang Prabang where the sole priest, Fr. Tito Banchong, had been in prison since 1977. In the rest of the country, his brother bishop, Msgr. Khamphanh, was also in prison as well as some priests, among whom Fr. Louis-Marie Ling, a future bishop. There was a rare consolation: the very discreet visit to Laos of Fr. Marcello ZAGO, future Secretary of the Congregation for the Evangelization of Peoples.

With the perestroïka of the Soviet Union and the first measures of liberalization in Vietnam (1986), Laos timidly began to open up to the exterior world. Jean Khamsé, who had experienced the worst, would remain very suspicious to the very end. Nevertheless, by the mid-1990’s (Laos joined ASEAN in 1997), visits by other Oblates became possible and brought real support to the bishop. Some religious women were also able to come from the outside, notably the Daughters of Charity of St. Vincent de Paul, who arrived from the Philippines in 1995.

During the Jubilee of the year 2000, in which the bishops of Laos were unable to participate, some 15 martyrs of Laos would be named among the “Witnesses of the Faith of the 20thCentury.” That was the beginning of a long journey that would culminate in their beatification in Vientiane on 11 December 2016. That would be the last great event in the episcopate of Jean Khamsé.

In the meantime, three cerebral strokes had affected the general condition of Bishop Khamsé and had made it more difficult for him to administer his vicariate and his relations with the civil administration. It was a frail bishop who offered to the Pope, at the age of 74, his resignation ahead of time. From the beginning, he had great pastoral concern and constant anguish: the near impossibility of communicating with the Vicariate of Louang Prabang, of which he was in charge until 1999, and with the northern provinces of Vientiane. Among other things, the region of Sam Neua, the land of Blessed Joseph Tien, remains totally closed to all Christian presence.

The sister of a Blessed Oblate
Statistics 2017