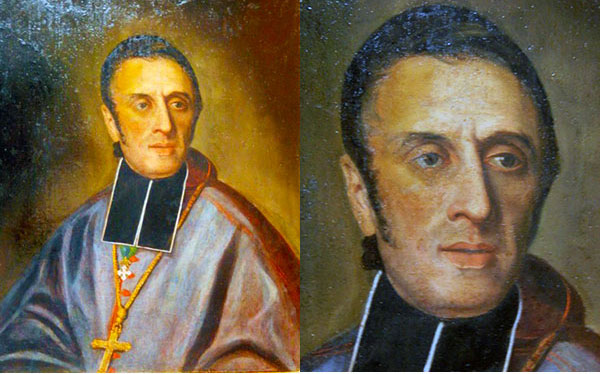 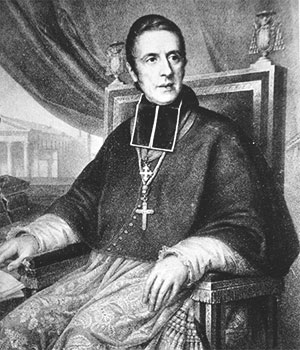 The “Curator” of the Museum of Marseille, Jean-Joseph Dassy, brother of an Oblate, Louis-Toussaint DASSY, between 1832 and 1834, painted one of the most famous portraits of Bishop Eugene de Mazenod. The young bishop is shown wearing the rochet, the mozzetta and the rabat. Besides the pectoral cross, he wears the insignia of a Commander of the Order of Saints Maurice and Lazarus, a title conferred upon him in 1827 by King Carlo Felice of Piedmont because of the interest he took in Italian migrant workers in Marseille.

On his face is a lively and attentive expression. He appears to be a self-confident and very determined person. His head is turned to the left and his eyes are fixed on something or someone; the lips are parted as if about to begin speaking. The chair on which he is sitting is located under a canopy; the curtain is raised to reveal, in the distance, the church dedicated to St. Lazarus, the parish he started with his personal funds when he was still Vicar General of Marseille.

The original is found in the bishop’s house in Marseille; there is a copy in the General House of the Oblates in Rome, dated between 1833 and 1837. 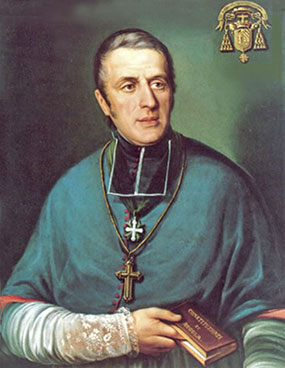 At the General House in Rome, there is a second oil painting dating to the same period. The quality of the painting leads one to think that this portrait is also by Jean-Joseph and from the same period. Now Eugene de Mazenod is standing. His right arm is bent over his body and the index finger is inserted into the Constitutions and Rules which he has in his hand. In the upper right-hand corner, there is his episcopal coat of arms and his motto. The painting was restored in 1984 and was chosen as the official image for the canonization. 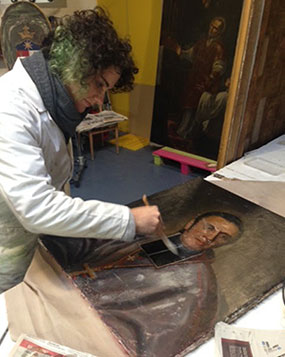 A later unknown painter seems to have been inspired by this portrait, still in the 1800’s, and perhaps in the years immediately after the original. This picture, which was kept until about ten years ago in the house in Aix, was roughly cut from its frame and then brought, in the worst of conditions, to the General House of the Oblates in Rome. It needed a massive restoration, carried out by Marta Gelsumini in her studio “Spazio MABI.” (http://www.martagelsumini.it) 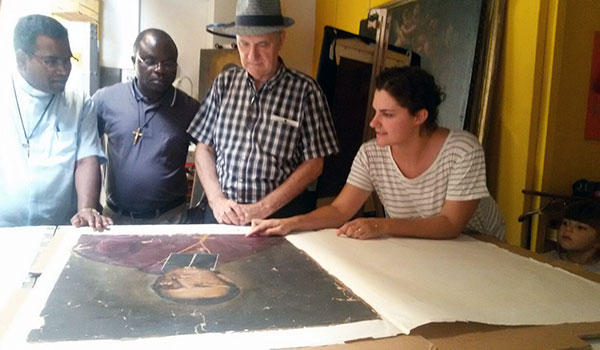 The canvas had tears that had been stopped with unsuitable and difficult to identify materials which further aggravated the conditions. It was necessary to intervene by at least partially removing these fillings and patches of cloth. The back of the painting was then relined because of the presence of a larger tear on most of the canvas which no longer guaranteed stability.

The front of the painting had been heavily retouched, changing the original image. The clothing had been repainted in red, with oil colors from a later period, in large strokes, different from the original ones. The overlay of red was perhaps to make the episcopal office immediately visible, ignoring that the original mozzetta of Saint Eugene had the color of the kings of France, blue. They had also painted over the cross and the awards. It was decided to restore the original, removing the superimposed paint. The tears were repaired and the portrait was resealed and retouched.

A new gilded frame was built.

Now we have a “new” oil portrait of Saint Eugene, almost unknown till now, and which will adorn the conference room of the OMI General House. (Fabio CIARDI)

February 17: to remind us of our identity
The mother-province closes the bicentenary