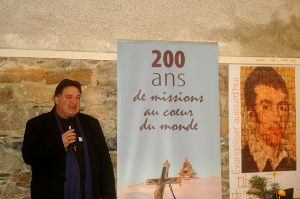 The mother-province closes the bicentenary

In the “Letter to Consecrated People” which opened the Year of Consecrated Life (2015), Pope Francis invited religious to  “look at the past with gratitude: to reap its inspirational impetus, to confess our fragility in order to live it as an experience of the merciful love of the Lord; to live the present with passion; to live the gospel radically and sincerely, in order to become become ‘experts in communion’ and to live the mystique of the encounter; to embrace the future with hope; to examine the horizons of the current world with vigilant caution.”

It was in this spirit that the Oblates lived the year 2016 and the bicentenary of the Congregation. It was actually on January 25, 1816, that Saint Eugene de Mazenod and his companions moved into the former Carmelite convent in Aix-en-Provence.

While it was a year rich in commemorative events on the level of the entire Congregation, the Province of France focused on two gatherings: a province assembly in February 2016 and a meeting which brought together Oblates and their friends during the Festival of Lights in Lyon on December 8.

Far from cultivating a more or less sterile nostalgia, rather, the idea was to take a look at the journey taken in order to discern policies that could inform the future. In this sense, after having taken the time to welcome people from all over France, Vincent GRUBER, the provincial, opened the day by asking Bertrand EVELIN to review these 200 years of Oblate life in France. Bertrand did so by focusing on the long and beautiful experience of the Oblates in the region of Lyon. 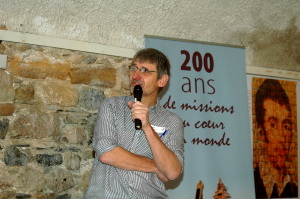 After a meal (conviviality is at the heart of the Oblate charism!), it was time to hear testimonies: why in the world would people organize their lives around the Oblate charism? Benoît DOSQUET answered the question with a brief presentation on the “Sermon at the Madeleine”.

Bernard WIRTH replied: “the world of the student” and “the world of the prisoner” from an interfaith perspective. He has been living in Thailand for more than 40 years, where he is also a university teacher and a prison chaplain. 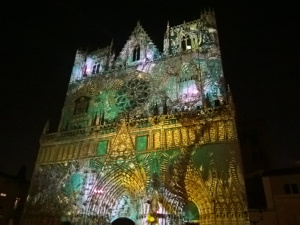 Thierry and Sophie replied “companionship.” They lead their lives as a couple by sharing and they wondered why and how, as a couple, they were brought closer to the Oblate community of Chavril.

Dominique DESSOLIN answered “the search” for new expressions of spirituality; from Aix-en-Provence he carries on an interior quest through fraternal community among artists.

The afternoon was spent in small group discussions where all was able to express their questions and beliefs on the role of the laity in the Church and on the meaning of an evangelization faithful to the charism which Eugene de Mazenod used in his famous “Sermon at the Madeleine.”

The Festival of Lights demanded it: the evening program was obvious – a walk around the illuminated streets of Lyon.

Sunday was intellectually “lighter:” Eucharist with the parish community of Sainte Foy in order to remember that the Oblate charism is received and lived in the Church, before finishing this meeting around a buffet in the community of Chavril. (http://www.oblatfrance.com)