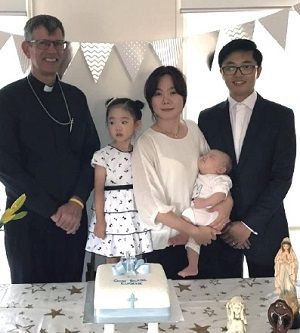 The Baptism of Eugene Kim

Oblate Bishop  Mark EDWARDS, auxiliary of Melbourne tells of a unique way to spread devotion to the Founder of the Oblates, St. Eugene de Mazenod.

One of my desires is for the Universal Church to be able to celebrate the optional memorial of St. Eugene de Mazenod. One of the prerequisites to adding his name the universal calendar is that the devotion to St. Eugene, that is his cult, has to be strong and widespread.

Only half-jokingly, I suggest the names Eugene or Eugenie to friends expecting a child, and where possible mention St. Eugene to confirmation candidates. I have confirmed five Eugene de Mazenods. Four of these were Year 6 students at St. Leonard’s Parish in Glen Waverley or Good Shepherd Parish in Mulgrave. They had older brothers at Mazenod College who proposed the name of St. Eugene to them. 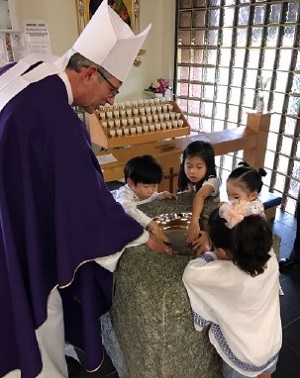 To my surprise and delight, one was in North Balwyn and chose the name because of his (Hong Kong Chinese origin) family’s trust in him. The mother had entrusted the family to the protection of St Eugene’s intercession many years before.

On Sunday 26 March, I was privileged to baptise Eugene Dong Ho Kim. His mother and father had been looking for a name and she awoke one morning with the name Eugene in her head. Both she and her husband liked the sound of the name. She shared this possibility with her sister who affirmed this name by telling her of St. Eugene’s life and of his role in their family. Little Eugene’s cousin is our Oblate pre-novice Stephen Cheon! (Cosmic  2017)