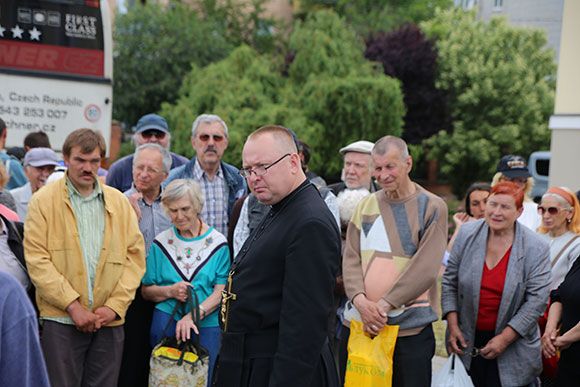 St. Eugene, St. Anthony’s Bread, and Our Lady of Fatima 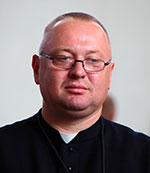 Brother Sebastian JANKOWSKI has spent 4 years caring for the homeless and abandoned in Kiev. Twice a week he goes with his team of volunteers to the streets of the city to distribute hot food, medicines, clothes and items for hygiene at strategic points. He also reads the gospel of the day and gives a brief catechesis. No less than 200 people benefit each time from this work. On June 13, 2017, instead of going to them, he took them to a very special place for a different experience..

In our Roman Catholic Church, the year 2017 has been proclaimed “The Year of the Virgin of Fatima” in honor of the centenary of her apparitions. In 1917, in that little Portuguese village, the Virgin asked for prayers for the conversion of Russia so that its errors would not spread: a few months later Lenin’s Marxist revolution would begin. At that time, Ukraine was under the Russian Empire, and then under the Soviet regime, so the people in Ukraine gratefully consider that the religious freedom we enjoy today is thanks to the prayer of millions of people over these 100 years. The message of Fatima has not lost momentum with the years. In Ukraine we continue to suffer the “mistakes” propagated by that Marxist-Leninist Russia. Many of today’s social problems are inherited from yesterday’s mistakes. That is why the people of Ukraine live with emotion and devotion this year of the centenary. 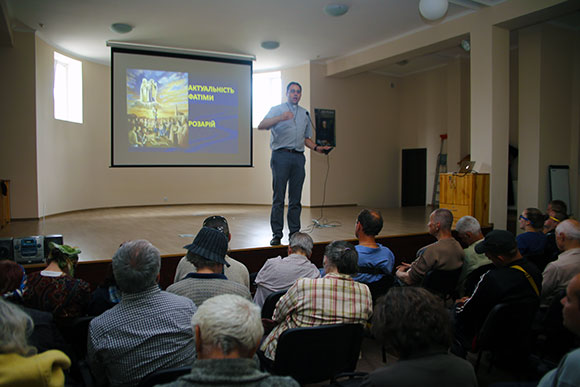 Sermons, novenas, retreats and pilgrimages related to the Virgin of Fatima are being organized in all the dioceses and parishes.. Paraphrasing the Sermon in the Magdalene of St. Eugene: “Will there be anything for you, the poor of Jesus Christ, in Kiev?” Of course, our dauntless brother Sebastian Jankowski, the “guardian angel of the poor”, as the Apostolic Nuncio in the Ukraine, Monsignor Claudio Gugerotti, called him,, did not stand by idle; he organized for them a special “pilgrimage of Fatima” for his beloved poor of Kiev.

Two entire buses, for about 130 people, plus some Caritas-Spes volunteers, went to the central house of the Ukrainian Delegation of the Missionary Oblates of Mary Immaculate in Obukhiv, about 30 kms South of Kiev. The place chosen is very significant. It should be mentioned that every year from May 13 to October 13, this Oblate parish organizes a procession every month on the 13th in honor of the Virgin of Fatima. Also in this house, Fr. Artur STRONCZEWSKI, the parish pastor, every week organizes the preparation of the food that is distributed among the homeless and needy people of Kiev. Father Artur is gaining fame as a cook, for he is well known among the people for preparing food not only to fill the stomach, as other organizations do, but also to delight the palate. We are all children of God, and this should also be evident in the food we offer to others. 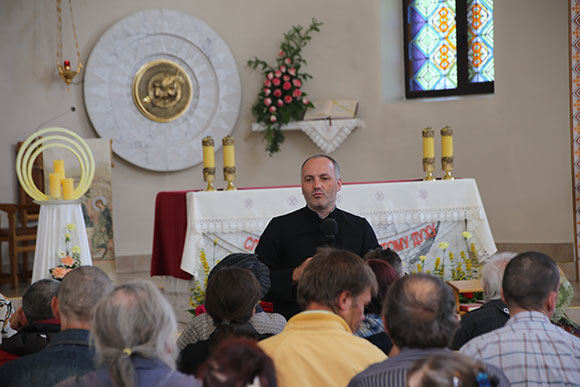 On arrival in Obukhiv, tables were awaiting them with a sweet aperitif. After they had rested, they moved on to the most spiritual part of the program, the main purpose of the day’s activity. Perhaps moved by a large statue of St. Eugene presiding over the main facade of the parish church of Obukhiv, our needy brethren from Kiev kept asking questions about the Congregation, our Founder, our history, So I had to improvise a talk about the life and charism of St. Eugene de Mazenod. For me it was a pleasure to use the life of St. Eugene to preach to the poor: by considering his life, I could repeat by heart some fragments of the Sermon in the Magdalene. As an Oblate it was a joy for me to remind them of the dignity they all have as children of God: “There is within you an immortal soul, created in the image of God … Christians, recognize your dignity!” said St. Eugene and I could paraphrase his words to an audience not much different. It seemed to me that in the face of so many abandoned people gathered in the parish of the Oblates and thanks to the good work of our brother Sebastian and aided by the Oblate community of Obukhiv, Eugene, from his place in heaven, was very, very satisfied with us. 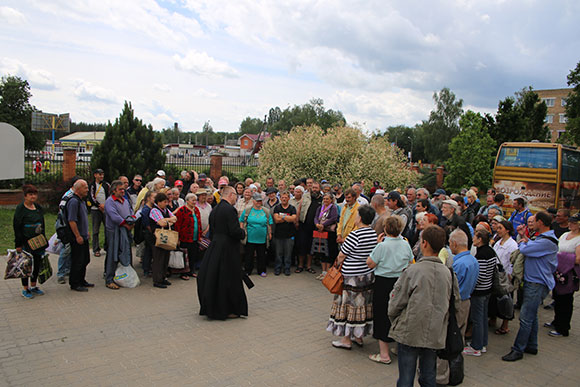 After this impromptu talk, Fr. Sergei PANCHENKO gave a conference on the Virgin Mary. With the help of a PowerPoint presentation, with photos of St. Maximilian Maria Kolbe, the Virgin of Fatima and St. John Paul II, he invited them to put their trust in the Virgin Mary and to bring her all their hopes and problems.

When the spiritual part concluded, we again remembered our bodies, cheering them with a delicious lunch prepared by the already famous P. Artur and his Obukhiv Oblate kitchen team. The laughter and even the games on this day spent together became all the more palpable with a dessert of cakes and cookies. After that, we ended the day with a film about the Virgin of Fatima, to focus on the mystery that had brought us on pilgrimage.

In speaking with Brother Sebastian, we realized a detail we had overlooked until then: it was the 13th of June. The date was chosen to commemorate the apparitions of the Virgin, but we had forgotten that it was the day St. Anthony of Padua, famous for his Bread of the Poor. And there was certainly no lack of miracles in order to be able to have this event. There was no money to pay for the buses, and suddenly, a few days before the pilgrimage that had been already announced and promised to the people of Kiev, a donor arrived asking: “Bro. Sebastian, what do you need?” Brother Sebastian was amazed when, as he told the donor the large sum of money needed for the, he heard her response: “Count on it; don’t worry.” St. Anthony and St. Eugene did their part to bring these poor people to the feet of the Virgin, so loved by both of them. (Fr. Diego SÁEZ MARTÍN, Delegation of Ukraine).