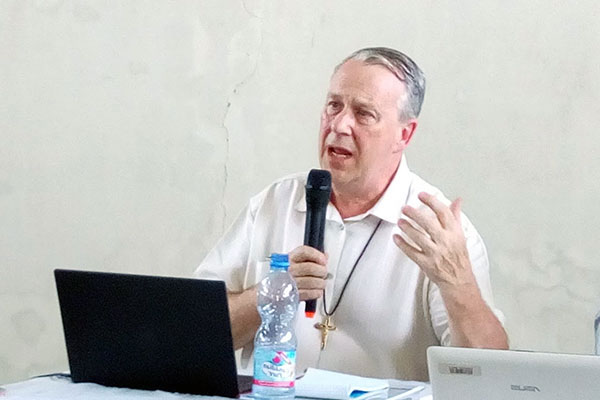 The Superior General of the Missionary Oblates of Mary Immaculate, Fr. Louis LOUGEN met with the Oblate formators in the DRC, on Sunday, March 4th in the Oblate Retreat House in Ifwanzondo, Diocese of Idiofa, Kwilu Province.

The fifty Missionary Oblates finished five days of retreat preached by Father Jacques-Marie Nzir, a priest of Idiofa, on the theme of renewal of the inner man. The participants regularly recited the “prayer for Oblate vocations”.

Before beginning a meeting of three days with all the Oblates in the Provincial Assembly, Fr. Lougen spoke of the importance of the task incumbent on all formators. Father Gabriel MATAKUMBA, Provincial Director of Oblate Vocations and formator at the Idiofa Pre-novitiate, participated in the formators’ meeting. He recalled the insistence of the Superior General on the vocation of the coadjutor Brothers, which is becoming rare in the DRC and throughout the Congregation.

The Year of Oblate Vocations responds to the call of Pope Francis who dedicated the year 2018 to youth. The Missionary Oblates carry on a campaign for vocations in the dioceses where they are present. (www.oblatcongo.org)

With the Province Assembly

On Thursday, March 8, at Ifwanzondo, some 70 Oblates, priests and Brothers, finished a three-day Assembly held after five days of annual retreat. They came from the three dioceses of Angola (Ondjiva, Caxito and Luanda) and the six dioceses of the DRC (Kinshasa, Kikwit, Idiofa, Isangi, Lolo, Matadi) where they serve.

The Superior General participated in the retreat and the work of the Assembly. The dean of the Congolese Oblates, Bishop Louis MBWOL, Bishop Emeritus of Idiofa, accompanied the Superior General from Kinshasa. Together, they were received in Idiofa by Bishop Joseph Moko.

The provincial superior of Congo, Father Joseph NTUMBA, presided over the closing Mass. He thanked his confreres and exhorted them to live in faith the values they acknowledged in the Assembly as the foundation of their consecration and their life, including the conversion to the Oblate ideal, the love of personal prayer and community, “speaking well” about confreres and fraternal charity. Father Ntumba recalled that the Congregation of the Missionary Oblates of Mary Immaculate is not an NGO, a philanthropic organization …

The Superior General congratulated the Oblates of Congo and Angola for their seeking of the essentials of the Oblate ideal. He thanked them for praying and working well, explicitly in this “year of vocations”. (Father Jean-Baptiste MALENGE)