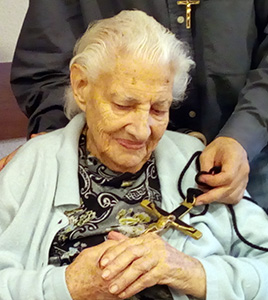 Last March 19, the Solemnity of St. Joseph, Engracia Menéndez Fernández, Honorary Oblate, died in Pozuelo de Alarcón (Madrid). After 95 years of life during which Engracia lived an intense love for her natural family and her spiritual family, the Missionary Oblates, she left for her ultimate encounter with God.

Engracia was born on April 25, 1923, in Madrid on Calle del Espíritu Santo. Since she was a little girl, she had close ties with the Missionary Oblates of Mary Immaculate in Pozuelo de Alarcón.

At the start of the 20th century, when the Oblates decided to open a house in Pozuelo for the scholasticate, it was Engracia’s father (his name was Robustiano) who told the Oblates that there was a house for sale that seemed to be just what the Oblates were looking for. It would become the Scholasticate of Nuestra Señora del Pilar.

Engracia’s father and Fr. Vicente BLANCO began a connection of friendship and family ties that has lasted to this very day. The Oblates of the community would visit the family from time to time and the family would often come to the scholasticate. 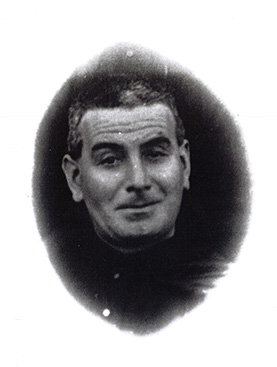 Engracia was 13 years old and a student at the Colegio de San José de Cluny, in Pozuelo de Alarcón, where the Oblates were chaplains. She was a schoolmate of Teresa Castán Giral, daughter of Cándido Castán, who would be martyred along with 7 Oblates in the Casa de Campo, at dawn on July 24, 1936.

Engracia’s father was twice taken prisoner to the Peoples’ Jail in the Oblate house. She went there to visit her father, but they did not allow here to enter the house and she had to limit herself to seeing him through a window. However, she could clearly see clearly how the militants were in the patio at the entrance of the house burning books, cassocks and religious objects taken out of the house. 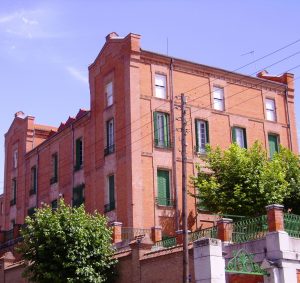 This relationship between Engracia and the Oblates only grew over the years, so much so that she was able to say that she knew all the Spanish Oblates. This close relationship was passed on to her family: her husband Javier Negro (also an Honorary Oblate) and her children, Javier and Blanca, close friends of the Oblates. In addition, as long as her health allowed her, she took part in celebrations of the Oblate Family.

During his last visit to the Spain, the current Superior General of the Congregation, Fr. Louis LOUGEN, visited her at her home and was able to share with her and her husband Javier a lovely family moment.

On March 20, at her funeral Mass and at her burial, the Oblate Family bade her a final farewell based on Christian hope. Fr. Ismael GARCÍA spoke in Engracia’s name the prayer that Jesus offered for his disciples at the Last Supper, “Father that those whom you gave me may be with me and contemplate my glory” — like the prayer that Engracia will be saying for her own family and her Oblate family.

As Saint Eugene liked to recall when one of his Oblates died that now we recognize that we have an intercessor in the Oblate community of heaven. May she rest in peace. (http://nosotrosomi.blogspot.it)