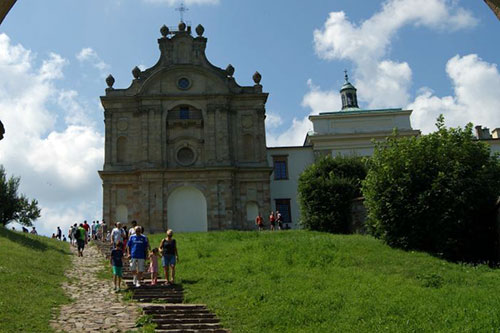 During the second week of Easter, more than 30 Missionary Oblates of Mary Immaculate from the delegation in Ukraine, headed by the superior Father Pavlo VYSHKOVSKYI, went on pilgrimage  to the Shrine of the Relics of the Tree of the Holy Cross in Poland, as part of the “Holy Cross Year” in the Polish Province.

Holy Cross is the oldest Polish shrine. It was King Boleslav Chrobry who in 1066 established the Benedictines there. The protection and the care of the Shrine is now in the hands of the Oblates. 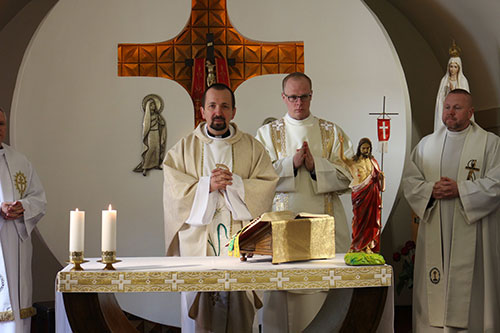 Fathers and Brothers, as well as the deacon and seminarians, came to the shrine to celebrate and to honor the relics of the Holy Cross, to renew their oblation and to reawaken their zeal and their devotion  for proclaiming the Gospel. For many of them, it was a return to the beginnings of their religious Oblate life. Years ago, they had lived at the shrine where the Oblate novitiate is located.

“This special pilgrimage of confreres was an opportunity to be together, to share about their work and ministry, to exchange experiences and to discuss the urgent needs and issues of the institutions entrusted to the Oblates,” said Father Dariusz MALAJKA.

Father Waldemar MEYKA served as the spiritual guide for the pilgrims from Ukraine. A member of the Holy Cross community, he served for many years in Ukraine. He gave conferences and homilies during the celebrations of Eucharist. 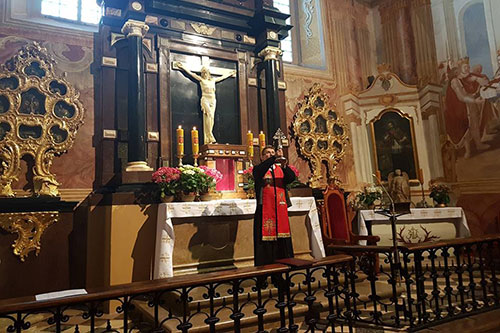 Father Paweł ZAJAC, Provincial of the Polish Province, also joined the pilgrims, presiding and preaching a homily at one of the Masses. Father Marian PUCHAŁA, Vicar Provincial for missions and delegations, also met with his confreres from Ukraine.

The presence of Polish Oblates in Ukraine dates back to the 1930s. At that time Fr. Ludwik WRODARCZYK was the first Oblate missionary in the Kiev and Zhytomyr area. He died a martyr’s death in Volynia in 1943.

After Ukraine regained its independence in 1991, the Oblate house in Hnivan was officially registered. At that time, new perspectives and possibilities emerged. The Oblates started to arrive in Ukraine and to set up new parishes and religious houses in Kiev, Chernihiv, Obuchiv, Poltava, Slavutych, Eupatoria, Kryvyj Rig, Tyvriv, Lviv, and even Russia (Pyatigorsk). 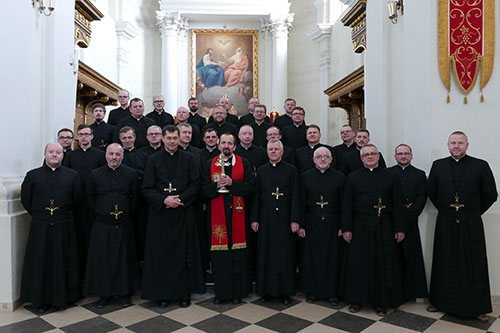 The work performed by the Oblates in Ukraine has resulted in the strengthening of the faith of hundreds of Catholics and regaining their religious identity. Two Oblates serve as bishop there: Bishop Jacek PYL Bishop Radosław ZMITROWICZ.

Thanks to the pastoral work of Oblates from Poland, there are now some Ukrainian Oblate priests and Brothers. These new vocations are a sign of God’s blessing and a hope for the further development of the Church.