On 21 May 2018, the Pope named Reverend Father Pierre Olivier TREMBLAY, O.M.I., as Auxiliary Bishop of the diocese of Trois-Rivières (Canada), assigning to him the titular See of Tino.

Fr. Tremblay was born on 22 November 1970 in Montpellier (France). Both of his parents were formed and personally involved in the “family” of the Missionary Oblates of Mary Immaculate. 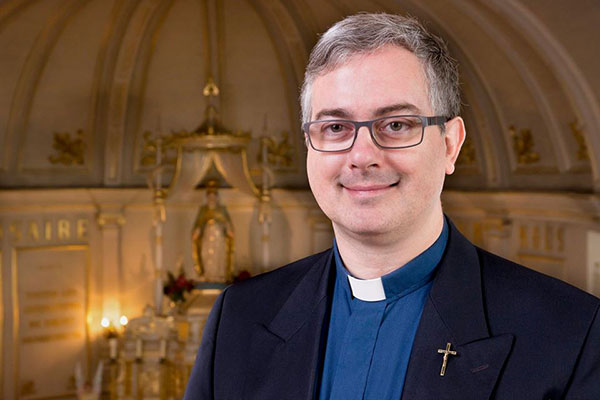 From 1983 until 1988, he studied at the Collège Saint-Alexandre in Gatineau (Canada) and then at the St. Augustine Seminary in Quebec (1988-1990). From 1990 until 1993, he studied at Laval University in Quebec where he earned a degree in theology. Then he began his Oblate novitiate in 1994 and made his first profession on 6 August 1995 in Vanier (Quebec).

He studied from 1995 until 1997 at St. Paul University in Ottawa where he obtained a degree in Missionary Sciences.

After his first assignment as a parish priest, he obtained a Doctorate in Practical Theology at Laval University in 2008. After serving as pastor of the Sacré-Coeur parish in Ottawa (2010-2016), he was named Rector of the Shrine of Notre-Dame-du-Cap in Trois-Rivières.

In his congratulatory remarks on the province website (www.omi-qc-on.com), Fr. Luc TARDIF, provincial of the Notre-Dame-du-Cap Province, said: “We rejoice that the Oblate charism can still beget apostles and pastors for the Church. In this year of Oblate vocations, it is undoubtedly the Spirit winking at us to affirm for us the relevance of our apostolic tradition for the service of the poorest in the Church.”

Meeting of the missionaries of the Northern Coast : Notre-Dame-du-Cap
Fourth meeting in Rome – Committee For The Constitutions And Rules