It was a beautiful day on May 9 at the Binh Nham Novitiate of Vietnam Mission. It was the gathering day for Oblates who had decided to follow the vocation of Oblate Brother. The program was led by Fr. James NGUYEN VAN THOM.

At the beginning of the gathering, Fr. James gave a brief introduction to the history of the religious Brother. Some prime examples include Saint Francis Assisi, Saint Gerard Majella, Saint Martin de Porres, Saint André Bessette, Venerable Anthony KOWALCZYK. The vocation of the Brother has a special place in the Church. 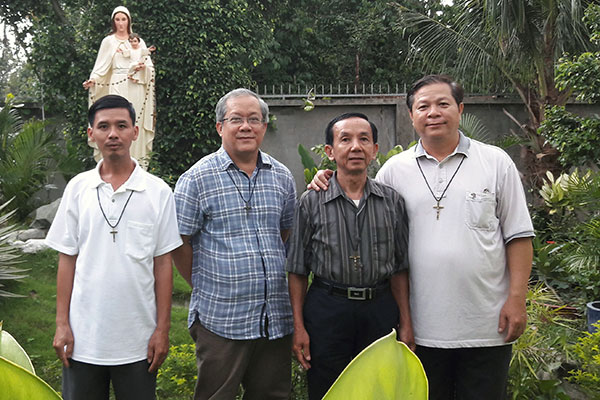 Among the great Oblate Brothers was Polish Brother Anthony Kowalczyk. He was born on June 4, 1866 and died on July 10, 1947. His life of witness left a deep impression on those who knew him. People placed his statute in a park at Saint Albert, Alberta, Canada. He was declared venerable by Pope Francis on March 28, 2013. His process for canonization is in progress.

Father James stated that nowadays, the Brother’s vocation, particularly after Vatican II when the role of the laity was better appreciated, can never be considered as “a second class religious.” Rather, they play an equal role with the clergy because they have the same dignity of all the baptized. They are doing pastoral ministry and evangelization due to their vocation: teaching, managing, working as artists, and so on.

In the afternoon session, there was sharing among the Brothers. They hope that more attention will be paid to the vocation of the Brother and to their formation. They would like to see that the Vietnam Mission give an introduction to the vocation of the Brother to those in the beginning stages, especially in the pre-novitiate, so that the young men could better understand the Brother’s vocation. There should be a similar focus during the novitiate and scholasticate so that all those in formation understand the Brother’s calling.

Since this was a first gathering of on-going formation for Brothers, they expressed their wish that there may be future gatherings so that the Brothers can deepen their Oblate vocation, particularly as Oblate Brothers. (Brother Gerard KIM LONG, translated into English buy John Bt. ĐỨC MINH)