“What you are doing today will determine what you will be tomorrow. Woe to him who does not take the present seriously.” The Coadjutor Archbishop of Kinshasa, Fridolin Ambongo, gave this advice to the students of the Saint Eugene de Mazenod Institute on Saturday, June 23, in the homily of the Mass he presided over for the closing of the academic year 2017-2018. The Mass was concelebrated in the chapel of the St. Eugene de Mazenod Scholasticate by Bishop Louis MBWOL, Bishop emeritus of Idiofa; Father Joseph NTUMBA, Provincial Superior of the Missionary Oblates; and about twenty other priests, including superiors and former students from various congregations that are partners of the Institute.

It was the occasion for a son of the family to return to the fold, his alma mater, after the years of commitment in his adult life. At the St. Eugene de Mazenod Theologate, from 1984 to 1988, the young Capuchin seminarian, Ambongo Besungu, received his first theological training for priestly ordination. From 1995 to 2005, he was a professor of moral theology until his appointment as bishop of Bokungu-Ikela. Here he is today, coadjutor archbishop of Kinshasa, having been archbishop of Mbandaka-Bikoro. 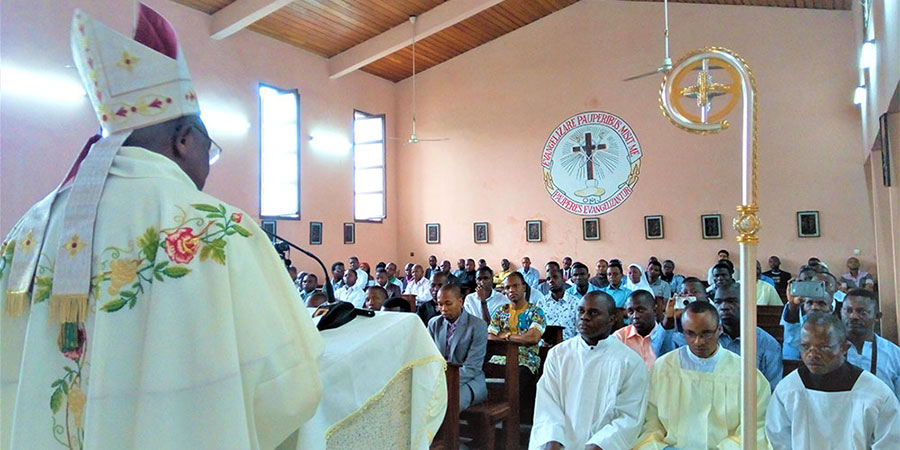 “You are a son and a father”, the rector of the Institute, Father Anaclet DUPAR, reminded him. He gave the archbishop a photo representing him as bishop in the courtyard of St. Eugene de Mazenod Theologate.

Bishop Ambongo, who was elected Dean of Students in 1986, said he came out of gratitude and to pay homage to his teachers. He shared some convictions with his younger brothers. He said he remembered his essay about the prophet “Amos, the subversive.” The student has learned to love justice in society. “What you are doing today will determine what you will be tomorrow.”

While he is still observing, seeing and listening before becoming Archbishop of Kinshasa, Bishop Ambongo congratulated the faculty and the entire institution for the integral formation of the future pastors of the country. He thanked the provincial superior of the Missionary Oblates of Mary Immaculate, Fr. Joseph Ntumba, Grand Chancellor of the Institute of Saint Eugene de Mazenod, for the participation of the Oblates in this work of the Church. He particularly offered congratulations for the opening of new courses of formation in computer science, economics and business administration, which give more opportunities for lay people to benefit from the formation provided by an ecclesiastical institution.  (http://www.isemomi.org)

A meaningful reunion
Venezuela, the Missionary Oblates: “An unending disaster”