The first Cameroonian Oblate is no more with us!

The province of Cameroon has lost its “Patriarch”, Fr. Alexis Marie ATANGANA, who after having enjoyed 95 years of life, passed away on October 2, 2018. 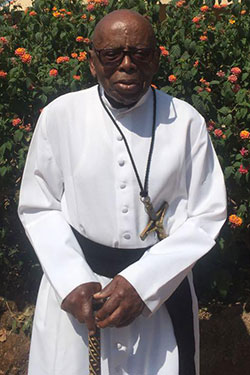 He joined the congregation of the Missionary Oblates of Mary Immaculate in 1951 and began his novitiate on July 26, 1953 at Brosse Montceaux (France). After his first vows on July 26, 1954, he was sent to Rome for further studies in theology. He enrolled in the Pontifical Angelicum University of the Dominican Fathers. After specializing in dogmatic theology, he did another specialization in canon law at the Institute of Propaganda Fide.

Father Antangana was ordained priest on December 8, 1957 in Garoua by the imposition of the hands of Bishop Yves Plumey, OMI. This very first ordination of an African priest in this part of Cameroon was an event that inspired a large number of Cameroonians and Chadians. Bishop Yves Plumey recalled that he had sent some catechists and pupils from all the parishes of his diocese so that they could see that a black man could become a priest. Not only did he become the first black priest ordained but also the first African missionary priest in northern Cameroon. 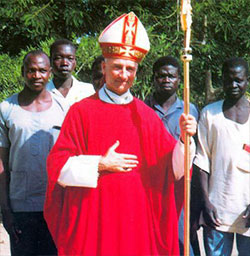 From then on Fr. Atangana began his great missionary journey in North Cameroon. While he was still a vicar, he founded several communities and parishes. To his further credit, we may note the creation of the very first primary school of the zone of Guider where he was the only teacher.

Among the difficulties of pastoral care, in this strongly Muslim region, was the incomprehension of the Muslim leaders with whom he attempted a difficult religious dialogue.

Father Atangana was also the founder of “Foyers de Charité” Cameroon. After meeting Marthe Robin, a stigmatized woman, founder of a charity  called “Foyers de Charité” (Foyers of Charity), and following two years as rector at the Minor Seminary of N’Gaoundéré, in dialogue with his provincial, he launched the first “Foyer de Charité” in Cameroon.   Mgr Plumey allowed this work to be established in his diocese, especially in the city of Ngaoundéré. In addition to his service as “Father of the Foyer”, he was entrusted with the ministry of military chaplain.

With an Oblate heart, close to the poor, he founded an orphanage in a home where he welcomed orphans and children in difficult circumstances. From among these children, there have come many senior administrators in Cameroon.

When he retired to Maroua, he taught Canon Law and Dogmatic Theology at the Major Seminary there. He was also appointed Judicial Vicar of the ecclesiastical province of Garoua by Bishop Antoine Ntalou. Fr. Atangana remained active until the end.

On the feast of the holy guardian angels, October 2, 2018, the Lord took him from us. We will accompany him to his last resting place on October 25, 2018 in Garoua.