Fr. Ellince MARTYR, Provincial of Haiti and I, visited the 13 Oblates of French Guiana from October 15th to 24th, 2018. The purpose of our visit was to learn more about their realities and to consult them individually regarding the new Mission Mandate for 2018-2021. 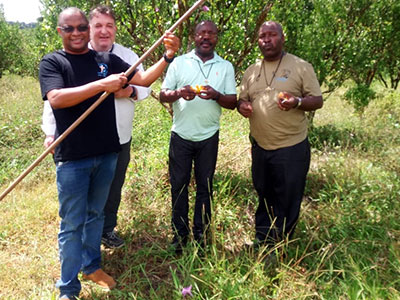 French Guiana, as a French overseas department (DOM) and European territory on the South American continent, attracts many citizens from neighboring countries in search of a better life. Thus, the Guyanese population doubles every 20 years while the GDP per capita decreases regularly. Its population in 2015 was 259,865 inhabitants.  More than half of these are of foreign origin: Amerindians, Bushinengues, Creoles, Europeans, the Hmong, Brazilians, Chinese, Surinamese, and Haitians are all found here!

In the past three years, more than 11,000 asylum applications have been filed in French Guiana, and 88% of them came from Haiti. The school system is also overwhelmed. Often the migrant children have no place in the middle and high schools. Due to lack of reception facilities, shantytowns are multiplying and in the face of this unprecedented migratory wave, French Guiana is at a dead end.

Of the thirty-seven priests in French Guiana, thirteen are Oblates.  The objective of all of them is to bring the local Church, composed of Guianese Creoles, Hmong, Brazilians, Haitians, Surinamese, and Amerindians, on a path of living together; shifting from a multicultural to an intercultural model of fraternal universal communion. 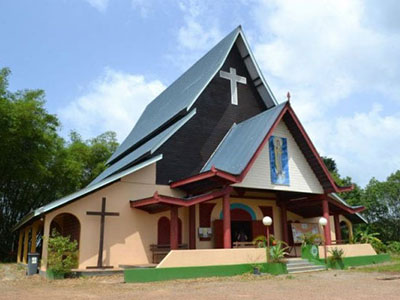 Church of the Hmong community, Cacao

We were struck by the closeness to and concern for the people, on the part of the Oblates, especially for the neediest in the rural forests as well as in the populated neighborhoods.  In every place, we saw the missionaries’ efforts toward intercultural mixture in the membership of the choirs, catechists’ groups, pastoral councils and other ecclesial structures.

The country is comprised of one single diocese, the diocese of Cayenne. In the context of the diocesan grand missions begun three years ago, the Oblates continue to help parishioners to form house-visiting teams and they themselves get actively involved in it. The goal is to gradually form small neighborhood ecclesial cells, and giving them formation for evangelization.

We continue our presence among the Hmong (in Cacao) who greatly appreciate their Oblate pastor, Gary MOROSE. We also serve among the Haitians who since 1960 continue to be the largest number of migrants. We want to increase our work with Haitians, by communicating with them in Haitian Creole since many of them do not speak French yet.  We wish, without limiting ourselves, to revive a true pastoral missionary presence among these Caribbean newcomers with social difficulties and to integrate them into the parishes.

Due to the massive arrival of immigrants and the development of new neighborhoods, the diocese is opening new parishes. Wilson FOUQUET, a young Oblate, is meeting with the young Afro-Surinamese – who are tempted by violence and delinquency. He is launching a musical ‘club’ to help them organize and develop their talents.

All the Oblates of the Mission wish to live in communities for a fruitful living of their Oblate charism. They believe that by doing so, they may be more effective, in carrying out a missionary pastoral ministry in our Oblate style. With the arrival of three young Oblates, Harry, Nathaniel and Ronel, it was possible to form two other small communities.  They want to develop a missionary program with goals and structures so that they can call Oblates from other units.

Having participated actively in the formation of the laity through the efforts of Georges LAUDIN, Antoine CHYV, Elie LAGRILLE and some others, the present Oblates wish to relaunch this service to the committed laity of the diocese, particularly in the fields of Justice and Peace, and youth ministry.

Oblates arrived here from France in 1977 to serve the Hmong; from Haiti in 1997 to serve the Haitians; and from Brazil in 2002 to serve the Brazilians. Having had Oblates from France, Laos, Vietnam, Haiti, Brazil, and Cameroon, we do not want to leave our Haitian missionaries alone and they themselves do not want that. In this multicultural land, we consider the international and intercultural dimension in our Oblate communities of great importance, in strict accord with the General Chapter of 2016.

As provincials of France and Haiti, we commit ourselves to seek more missionaries from other units and to contact Oblate Major Superiors from Africa, Asia and Latin America.

Call to the Congregation

For all these reasons, we, the provincials of France and Haiti, believe that it is relevant and eminently missionary to continue our presence in French Guiana. In this Amazonian land, which is a small laboratory of cultural globalization, the integral human development in its anthropological dignity and its spiritual hope, await us.

We therefore appeal to Oblate missionaries ready to meet these challenges.  We are looking for Missionary Oblates who possess the following skills and talents: