WYD scammers could not stop Tijuana youth group; Thanks to generous supporters 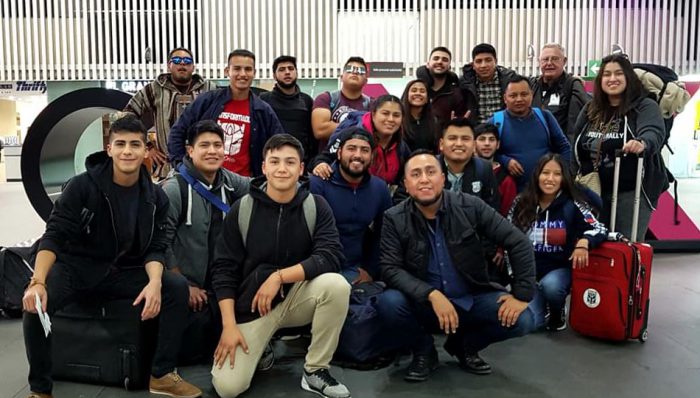 19 members of the Youth Group at the Oblate Mission Church of St. Eugene de Mazenod Parish in Tijuana, along with a number of Oblates are breathing a great, thankful sigh of relief thanks to the fast work of the Oblate Missionary Society, and some generous donors who put a once-in-a-lifetime trip to World Youth Day back on track after it was almost derailed by scammers. 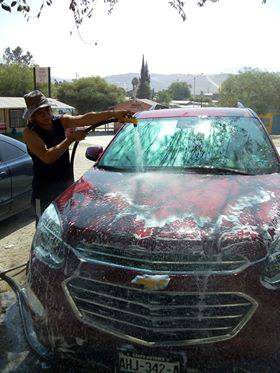 One of many car washes the youth sponsored to raise funds

For the past year and a half, the youth group led by Fr. Jesse Esqueda, OMI at the parish has been sponsoring car washes, selling tamales, raffle tickets and doing work of all kinds to raise funds for a trip to World Youth Day, which begins this Saturday, January 19, in Panama.  Having raised over $20,000, the money was placed with a Mexican Travel Agency specializing in travel arrangements for groups heading to World Youth Day. In addition to the Oblate group, the company was handling travel arrangements for 11 dioceses in Mexico and had collected a total of $500,000.  All seemed in order until Fr. Jesse got the shocking news on Monday January 14, that all the money for all the groups was gone. They were the victims of an elaborate scam. 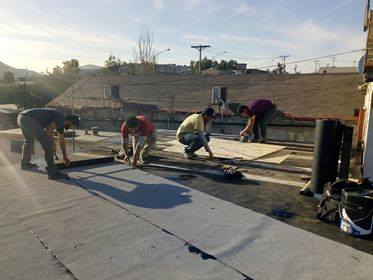 Fr. Jesse recounted the events on Monday that revealed the scam, “A group from the Diocese of Zacatecas planned to attend the WYD pre-events and was instructed to make a bus ride to Mexico City airport to transport them to Panama. When they arrived at the airport, they were met with confusion by airport personnel about their promised chartered plane to Panama. With attempts to contact the company for explanations, calls were unanswered and their contact person was nowhere to be found. Needless to say, word spread fast to the other 400+ youth that had used the same company. 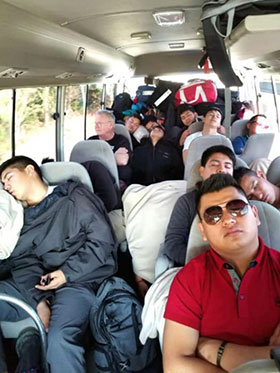 After their original travel plans were dashed by the scammers, the new, last-minute arrangements meant long hours on a bus.

“The youth are devastated with this reality” Fr. Jesse said. “Our youth worked for over a year to save money to go to Panama. They sold thousands of tamales, washed hundreds of cars, sold countless raffle tickets and participated in many other fundraising events to raise enough money to pay for their trip. We don’t know what the next step is at this point. We paid over $20,000 to the company for arrangements for airfare, ground transportation, lodging, and meals. The youth were looking forward to this great event and to see Pope Francis. This was going to be the first trip outside of Mexico for most of the youth from our group.”

Tuesday night, Fr. Jesse called an emergency meeting to inform the kids.  He said the kids were crying, and heartbroken, and expressed doubt that they could go.  Some said they gave up hope knowing they won’t be going – Fr. Jesse is working with them. 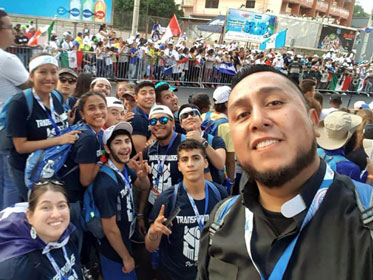 In this seemingly hopeless situation, some individuals who deal in hope went to work: Bishop Michael Pfeifer, OMI, Bishop emeritus of the Texas Diocese of San Angelo, began canvassing his impressive list of contacts.  Fr. David Uribe, OMI, Director of the Oblate Missionary Society, the fund-raising arm of the Oblates asked Dennis Kempf, Director of Charitable and Planned Giving at OMSI-Belleville, who they might turn to in this unique situation. Dennis turned it over to his team with the goal of replacing the money within 24 hours. On Wednesday, phone calls by Bishop Pfeifer and Fr. Uribe to donors began replacing the lost travel funds at a surprisingly fast pace. The calls continued and the group inched toward the goal. On Thursday, just before noon, Dennis Kempf received a text saying  a donor pledged  the remaining amount! Dennis’s text message in response speaks for itself:

YEAH!!!
When my phone dinged with this text, most of my team was within earshot, and they all asked “What did does it say?”
I read the GREAT news out-loud, and everyone in CPG yelled “YEAH” all at once!  Several of us experienced goose-bumps with this great news. Thank you for asking our donor and thank him SO much for responding to this crisis!
GREAT TEAMWORK on raising the money to send Tijuana’s youth to the World Youth Day in Panama!!!
– Dennis

The good news was immediately transmitted to Fr. Jesse who is now scrambling to get a lot accomplished in a short period of time.  Latest reports are that the Oblate youth group might be able to join the Monterrey Archdiocese* Diocese on a chartered AeroMexico flight direct to Panama City, meanwhile they are still working on all the other logistics: where they’ll stay, transportation, food, passes to get into WYD, etc. You can bet that Fr. Jesse and those young people will get it done!

All of this took place in the span of four days. A heartbreaking act of thievery, overwhelmed by prayer and even greater acts of generosity and love. A faith encounter that will rival anything those young people will experience at World Youth Day.

Statement of the OMI Province of the Philippines on the Jolo Cathedral Bombing
New Provincial – OMI Lacombe, Canada