Archbishop Lampon: ‘My heart bleeds for my people in Jolo’ 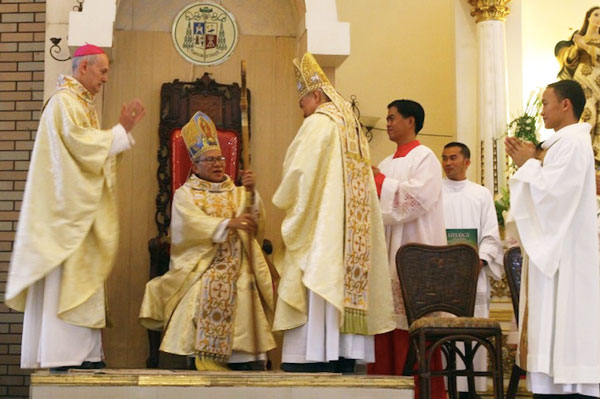 Archbishop Angelito Rendon Lampon, OMI, receives on Wednesday afternoon, January 30, 2019 the pastoral staff of the Archdiocese of Cotabato from Cardinal Orlando Quevedo (R), who has retired as Archbishop of Cotabato. The Papal Nuncio, Archbishop Gabriele Giordano Caccia (L), describes the installation amid tight security as a “Church event” not only of the Philippines but “of the whole Catholic Churcch.” MindaNews photo by GREGORIO C. BUENO

COTABATO CITY – Archbishop Angelito Lampon of the Oblates of Mary Immaculate had mixed feelings when he assumed his post as head of the Archdiocese of Cotabato.

He should be celebrating over his new position, which he took over from Archbishop Cardinal Quevedo, who recently retired.

But when Lampon was installed on Monday afternoon, by the Papal Nuncio, Archbishop Gabriele Giordano Caccia, it was just a day after two bombs went off at the Cathedral of Our Lady of Mount Carmel, killing 21 people and wounding at least 111 others. 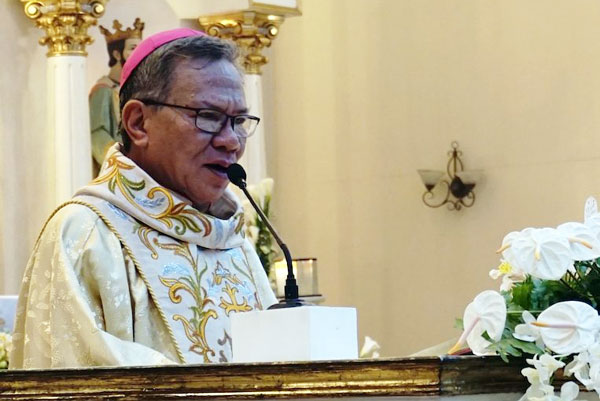 Archbishop Angelito Rendon Lampon, OMI, newly-installed Archbishop of the Archdiocese of Cotabato during the mass on 30 January 2019. MIndaNews photo by GREGORIO C. BUENO

Lampon had served in that cathedral for 21 years, regularly celebrating the 8:00 a.m. Mass. But last Sunday, a diocesan priest took over because Lampon was in Manila attending a meeting of the Catholic Bishops Conference. 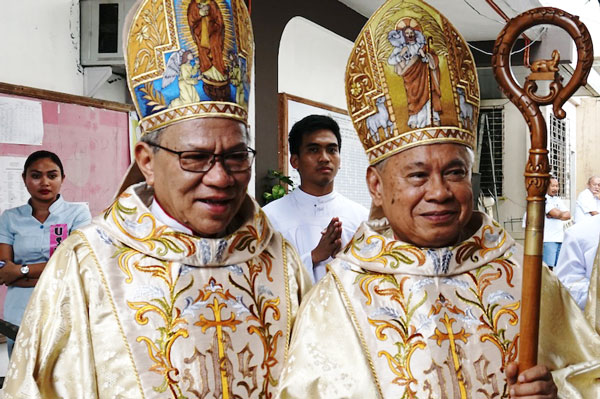 “I have a heavy heart, and this heart is bleeding for my people who perished in the Jolo cathedral bombings,” Lampon said in a brief interview after his installation.

“I have known those regular churchgoers who died in the blast,” he added. “They have become my family, my brothers and sisters, my heart is really bleeding for them.”

“It’s a big emotional upheaval inside and yet my faith tells me to continue extending a hand of friendship, in inter-religious dialogue,” the new archbishop said, his eyes slowly turning red.

Still grieving for his flock, Lampon said the Oblates and the Catholic Church would not be cowed by the violence.