Oblates are called to be martyrs.

The Conference on “Oblation and Martyrdom” held at the Emmaus House of Spirituality in Pozuelo de Alarcón (Madrid), Spain, was successfully ended on May 5, 2019. Among the participants were the Oblates, nuns, lay associates mainly from Spain and Italy. Fr. Superior General graced the occasion as well. Here is what Fr. Fabio Ciardi, the Director of the General Service of Oblate Studies and Research in Rome and the convener of the Conference, wrote on his blog. 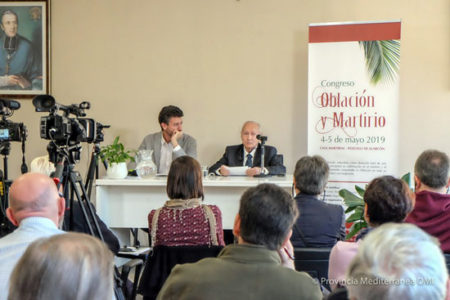 Mission accomplished! The conference on “Oblation and martyrdom” ended successfully: 23 speeches covering different parts of the world; over 60 people present and actively; over 500 who followed via streaming; representatives of all the members of the oblate family; half of them women!

I have collected all the material for a publication in three volumes of “Oblatio”, which will help us to know the stories of the martyrs and the message that they continue to address to all of us.

Our Founder, Saint Eugene of Mazenod, was convinced that an Oblate with his act of oblation should be ready to give his life also as a martyr. In fact, after more than 200 years of existence, a good number of them have been recognized by the Church as martyrs. Most of the other Oblates who died tragically, about seventy, may not be considered martyrs in the strict sense. However, since their death is linked to the mission, they have given an extraordinary oblate witness. 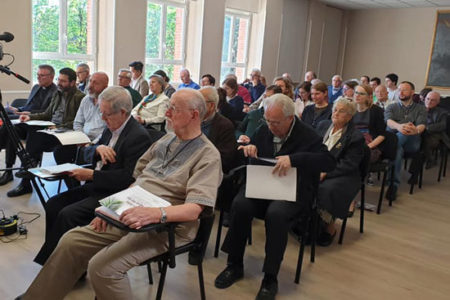 These are not just stories from the past, but events that unfortunately continue to occur in the present, such as the killing of some members of our parish community in Jolo, the Philippines, a few months ago.

Among the many testimonies during the conference, one of the simplest and most beautiful is perhaps that of the first Oblate martyr. I entrusted the task of recalling us the memory of him to a woman, Ileana Chinnici, precisely because he gave his life in defence of the dignity of a girl. 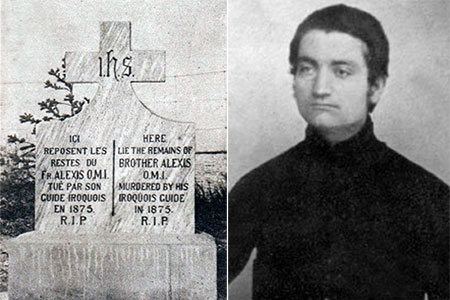 From France to Canada. We are in the second half of the nineteenth century. During an expedition, to welcome some of the incoming nuns, Br Alexis went forward with a caravan. With him, there was a local guide, Louis, some meticulous families, and a 14-year-old orphan, Geneviève, who had to move to another boarding school.  Faced with the difficulties of the route, the caravan divides: Alexis must reach the nuns, and goes forward, the families instead go back, leaving Geneviève with Louis and with Brother Alexis.

This is how Alexis meets his martyrdom, and the fulfilment of God’s plan to be killed and cannibalized, because it hinders a planned and infamous rape perpetrated against a defenceless girl. 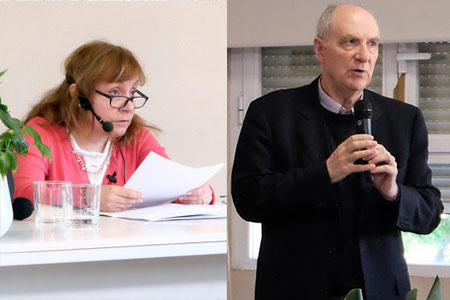 Ileana and Fr. Fabio during the Conference

“Who is poorer than an orphaned mestizo teenager?” – Ileana told us. “She had no parents, no affections, no family, no property, no culture… Who could protect her? Who would defend her?  How important is your dignity as a girl, as a woman, your intimacy, your femininity? Who would be interested if she became an object of possession, of violence, of abuse, of inhumanity? Géneviève is defenceless against the lust of Louis, a violent and unscrupulous man. But the simple defend the simple, the pure defend the pure… Alexis and Gènévieve, killed and devoured, martyrs of purity and poverty”.

Oblation and martyrdom. One cannot understand the depth of oblation if one does not look at its maximum fulfilment. The oblation of Jesus was a love that came to give life. Even the oblation of some Oblates came as a result of their attempt to give life. This climax must always be before our eyes, to remind us that there is no greater love than giving one’s life. We must always strive for this radicality and totality of love, always, for everyone.

Passing on the batons
A joint celebration in memory of St. Eugene