A joint celebration in memory of St. Eugene 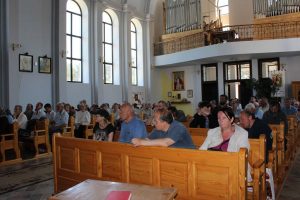 The Missionary Oblates of Mary Immaculate from our Kiev and Obukhov communities decided to celebrate the feast of the holy Founder, St. Eugene de Mazenod, in a special way in accord with his charism – to evangelize the poor.

Brother Sebastian JANKOWSKI, who has been taking care of the poor and the homeless on the streets of Kiev for more than 6 years, also gave an exceptional gift to those he cares for – he organized two buses so that more than 80 people could take part in the day of recollection in the main house of the Missionaries of Mary Immaculate in Obukhov. 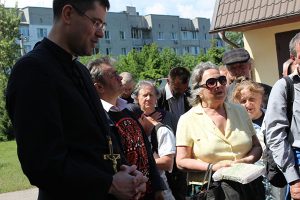 This unusual meeting was supported by his brothers.   Father Sergiy PANCHENKO who takes care of the prenovitiate and the Obukhov house of mercy, conducted a prayer service, after which the poor enjoyed delicious festive dishes from the monastery kitchen.

Later, Father Pavlo VYSHKOVSKYI, the Delegation Superior, spoke about St. Eugene de Mazenod and presented a film about the Saint, who, even though he had come from an aristocratic family, considered serving the poor to be his life and mission.

The celebration ended with the blessing of Fr. Pavlo; and those who arrived from Kiev, returned home with joy and happiness.