By Lorraine Turchansky
An extract from an article originally published on www.grandmedia.ca (July 26, 2019)

The remains of three pioneers of the Church in Western Canada have been laid to rest in new graves at St. Albert, the historic heart of Catholicism in Alberta.

Bishop Vital Justin GRANDIN, Father Albert LACOMBE, and Father Hippolyte Leduc were members of the Oblate Missionaries of Mary Immaculate, a French order of priests who came west to serve the First Nations and Metis people and the European settlers who followed. The original mission at St. Albert was founded in 1861 by Father Lacombe, and the Oblate Fathers have served the parish ever since.

Grandin was the first Bishop of the St. Albert Diocese, precursor to the Archdiocese of Edmonton, and the two priests were central figures in the development of parishes, hospitals and schools in the diocese.

For more than 100 years, the remains of Grandin (1906), Lacombe (1916), and Leduc (1918) had been interred in the crypt beneath St. Albert Church, site of the original St. Albert Cathedral on historic Mission Hill. Although burial crypts are common in European churches, they are relatively rare in Western Canada. 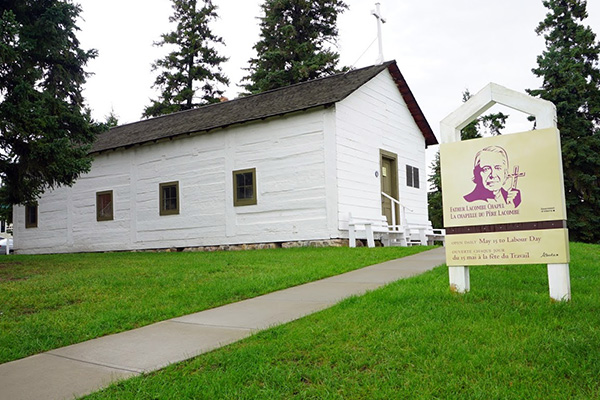 The crypt was part of popular tours every summer, along with the Father Lacombe Chapel, which was constructed in 1861 by Fr. Lacombe with local Métis residents and is recognized as the oldest building in Alberta. Every Catholic child who grew up in the area likely visited at least once.

But it was only accessible only from the outside and had deteriorated due to moisture seepage and lack of air circulation. Repairs would be costly – and involve moving the caskets.  So the Oblates wanted to transfer them to the nearby St. Albert Cemetery, which has a section reserved for their priests and brothers.

Funeral director Aimee Anderson was tasked with coordinating the transfer of the remains.

“Professionally, as a funeral director, I couldn’t imagine being involved in anything of this scope and magnitude,” Anderson said. “But that’s little. For me spiritually, it was unbelievable.”

The remains of the two priests were quietly buried in new graves on May 8. With that done, work began on Bishop Grandin’s tomb, which was constructed from large river rocks and mortar and topped with a thick slab of marble.

“There were so many protocols in terms of how his remains were to be moved … and I took this very, very seriously,” Anderson said. 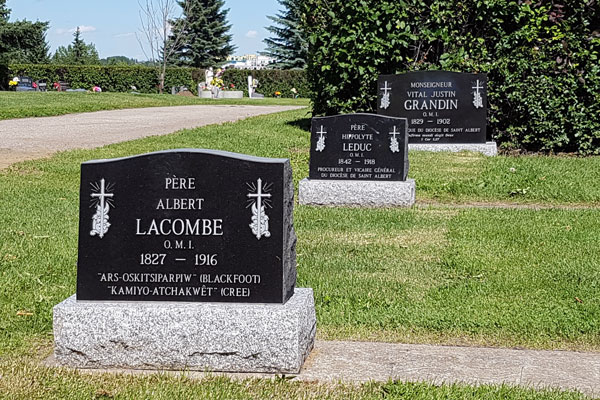 “It was a very prayerful process, and I felt that all the people who came to work with me in this process were so unbelievably respectful and reverent, people who are not necessarily Catholic but were so mindful of what they were doing and what piece they played in this part of history. That was a real gift for me to see.”

Some artifacts that had been on top of the casket, along with a few Grandin artifacts the Oblates had discovered in 1938, were placed in a custom-built miniature casket that would be buried in the new grave.

On May 27, Bishop Grandin was buried next to the two priests after a service attended by representatives of the Oblates, the Archdiocese, Connelly-McKinley, and the Alberta Francophone Historical Society.

For Anderson, who has worked as a funeral director for 11 years, the project was nothing less than transformative. Her eyes filled with tears as she recalled the cemetery service; finally, she felt affirmed in her role in the whole process.

“I felt that peace just rain down as they were being laid to rest. I don’t know how that can’t change your life. It changed my life.”

That section of the St. Albert Cemetery is now home to the graves of two Oblates who have been recognized by the Church for their ‘heroic virtues,’ meaning that their lives demonstrated consistent efforts to grow in holiness. Bishop Grandin was declared venerable in 1966 and Brother Anthony Kowalczyk in 2013. A venerable person is required to have two miracles attributed to their intercession before the Church recognizes them as a saint.

Brother Anthony, sometimes referred to as ‘God’s Blacksmith,’ served much of his life as a beloved gardener and handyman at Edmonton’s College St-Jean, which is now the French faculty of the University of Alberta.