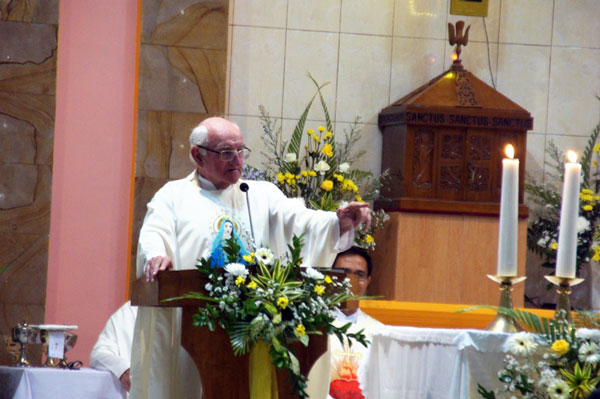 The 76-year-old clergyman served for the past 46 years in Cilacap, southwestern Central Java province. Since 1973, when he arrived in Kampung Laut, he led several successful humanitarian projects, which earned him the recognition and the deep affection of the local population. In 1983, he became an Indonesian citizen and in 2012 he received the Ma’arif Award.

The missionary’s work brought considerable development to the area. Before his arrival, locals were employed mainly in fishing in marshy areas. Since then, their life has changed radically, and they are now rice producers.

The work of the Dublin-born priest did not stop at farming but also touched infrastructure (such as dams and roads), education, professional training, and local small and medium business development.

The priest’s fete last week began with a Mass in the chapel of the OMI minor seminary in Cilacap. Romo (Father) Carolus led the service with two confreres, Fr Tarcisius Eko SAKTIO, provincial superior of the order in Indonesia, and Fr Vincent Watun, involved in Yayasan Sosial Bina Sejahtera (YSBS), the foundation set up by the Irish missionary in the 1980s to eradicate poverty. Some 29 OMI priests came to Cilacap from all over Indonesia for the occasion.

In his homily, Fr Carolus urged those present to do good deeds and engage in humanitarian works for the benefit of others. “Entering paradise will be your main reward,” he said.

According to YSBS member Trias Dwi Nugroho, Being among people, talking to and working with people regardless of their ethnic and religious background are Fr Carolus’s natural qualities.”

Over the 46 years he spent in the mission in Cilacap district, the missionary worked with local authorities and ordinary people: fishermen, peasants, street vendors and anyone who needed practical help to improve their economic situation. Therefore, it was not a surprise that the fête’s organizing committee included both Catholics and Muslims.

Ganang, a Muslim mathematics teacher at Yos Sudarso High School in Sidareja, was also in attendance. “My students and colleagues are 90 per cent Muslim, but we are very happy to work in the Catholic school founded by Fr Charles.”

William Kwan, from the Jakarta-based Indonesian Creative Economy Initiative (Bekraf), spoke with AsiaNews about Fr Carolus and had only good things to say. “He is a tough guy” and “a good communicator.” He is also a good example of “how a Catholic priest” can “cement interfaith cooperation in society”.

A Glimpse of the Oblate Missions
Work takes priority over religion in Japan’, says Oblate priest ahead of Pope’s visit