Christians and Muslims give thanks for missionary presence in the Sahara.

In July 1954, during the Holy Marian Year commemorating the centenary of the proclamation of the Dogma of the Immaculate Conception, Pope Pius XII created the Apostolic Prefecture of the Sahara and entrusted it to the Missionary Oblates of Mary Immaculate. With this act, the first seeds were sown for the Church to take root in this territory where the local population was and is entirely Muslim. Father Leo Deschâtelets, OMI, then Superior General, had written to the group of missionaries: “We will not be true missionaries if we do not deal with Muslims.” The first Oblate missionaries, headed by Felix ERVITI, the newly appointed Apostolic Prefect, arrived in August 1954. He would be followed by no less than 35 Oblates who left their mark.  Sixty-five years later, Muslims and Christians remembered gratefully their beneficial presence on this earth. 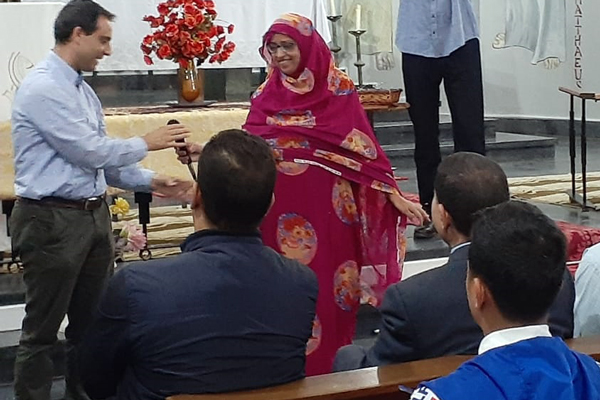 The celebrations of this Jubilee took place on two different dates and in two places separated by more than 500 kilometers: Sunday, November 17, 2019, in Dakhla and the following Sunday, in El Aaiún. In the morning, the small Christian community thanked God, solemnizing the Eucharist with African rhythms in the first of the celebrations, and then, in the second, we widened the horizon to the entire world in recognition of representatives from all continents. Our Christian communities are made up of itinerant workers or migrants who are present only on a temporary basis. The Oblates, the only permanent presence, make their way with these people, learning together how to be witnesses of Jesus and his Gospel in an Islamic context. We are a small Church, a ferment of fraternity and sowers of hope who, together with our Muslim brothers, walk in this desert that surrounds and inspires us; and we fight for a more fraternal, just world. A small church, like a mustard seed, we are talking about thirty-five of us who celebrate in Dakhla and fifteen in El Aaiún… 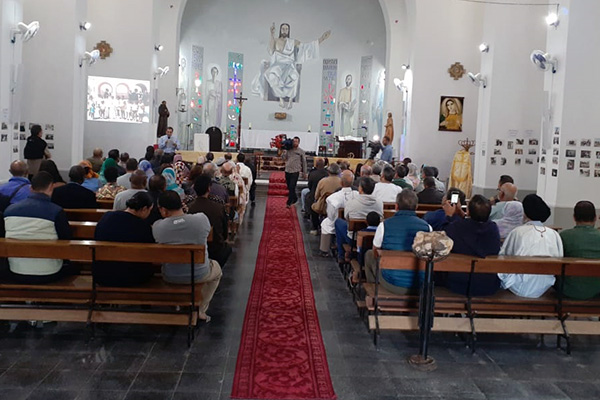 The second part of the celebration was a meeting with the local population to thank one another and to thank God together. And here, all our expectations were exceeded, not only by the very large influx of those who came, but by the environment that was created. The memory of the missionaries who passed through is very much alive among the Muslims who appreciate that simple presence of the Church in their land. Emotions increased as we remembered them, looking at photographs, and as stories and anecdotes arose in the small gatherings. Some tears were shed as we remembered happy and painful moments that were lived together and especially when listening to the video recorded message of Fr. Camilo GONZÁLEZ, who spent more than 45 years on the mission. 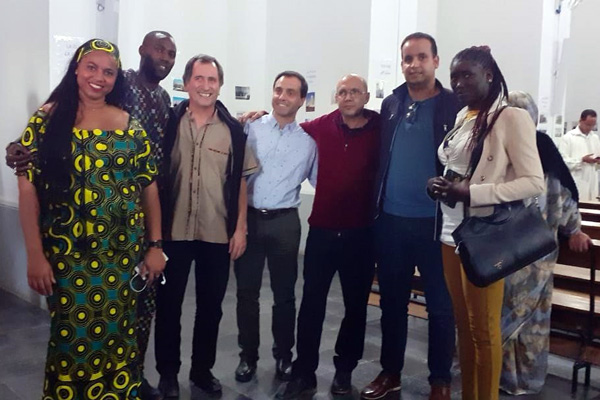 Mario LEÓN, Apostolic Prefect of the Sahara, stressed that for us, Oblate missionaries, it is a gift from God to be here and that this meeting of so many Muslim friends with the small Christian community was also a commitment to continue walking together. Signs of recognition were evident on faces, while listening to parts of his intervention in Arabic that included quotations from the Koran and which were repeated in French, Spanish and English. Even the local press and television echoed it. Later there were some small interventions by people, prominent in the local society, who wanted to express thanks for the presence of the Church during these last sixty-five years. We also had some local representatives of the Ministry for Religious Affairs who insisted upon the beneficial coexistence of the two religions.

We ended the meetings with a fraternal ‘agape’ that allowed us to keep talking and dreaming so that we can keep walking together. And by dreaming this, even though many years distant, and in a very different context, we are simply sharing the Founder’s dream when he sent his Oblates to Algeria.