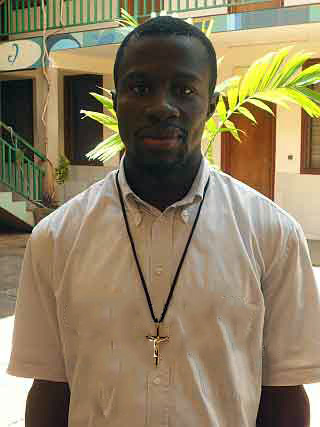 The Oblates began their mission in Guinea Bissau in 2003, coming from Senegal, a Delegation of the Mediterranean Province. The first mission was Farim, located northeast of the capital Bissau in the namesake diocese. Since 2011 we have opened a mission in the suburbs of Bissau, and in 2014 the mission of Calcine in the diocese of Bafata in the southeast.

Currently, eleven Oblates are working in Guinea Bissau. The time is not yet ripe for the abundant harvest, but some fruits are beginning to ripen. Last month, the perpetual profession of Brother Aful Sanha allowed us to give thanks to God for the first son of the Guinean land to enter definitively into the Oblate family. A Brother, moreover, makes us foresee a real rooting of the Oblate mission. Originally from the Farim Mission, Brother Aful did his formation in Dakar and Yaoundé, as well as a professional training in building construction.

The local Church shared the joy with the followers of the traditional religions and the Muslims who came in great numbers to experience this rare event. After the celebration of the Perpetual Profession, about ten young people approached Brother Aful and expressed their interest for a vocational discernment in order to join the Oblate family.

For the past three years a formation house has been open in Bissau for a first contact with the young people who will then continue their formation in Dakar. Some of them are already on their way to respond to God’s call in the family of Saint Eugene.

Christians and Muslims give thanks for missionary presence in the Sahara.
The Blessing of the New Scholasticate