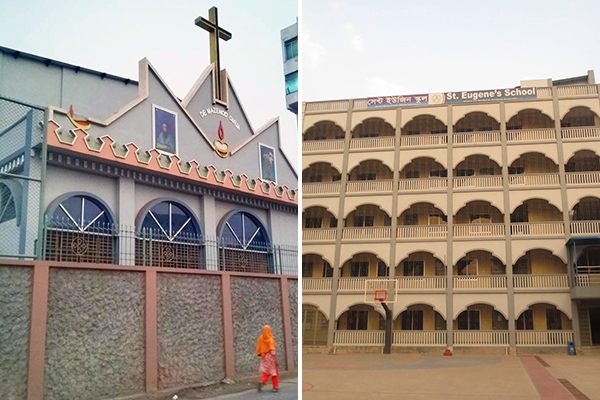 De Mazenod Church, Nayanagar (Baridhara), Dhaka, to a certain extent, can be identified as multi-faceted compound! Four units at this compound shine forth its uniqueness and beauty:

Bearing the names, these units have been witnessing the Charism of Mazenod, “Evangelizing to the new faces of the poor.” Oblates came to Bangladesh in 1973. Since then, they have been tirelessly engaged in evangelizing mission among indigenous people, tea-estate people and internal-migrants in four dioceses in Bangladesh. 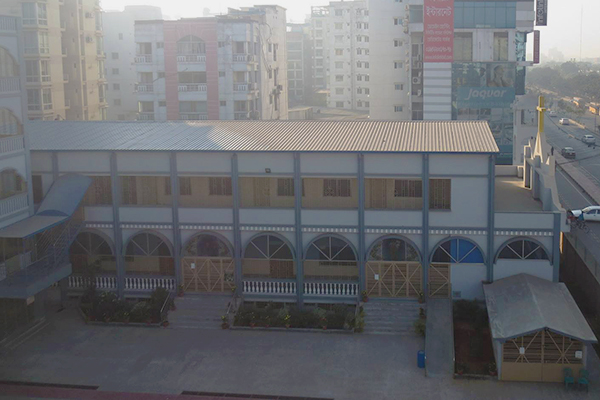 In 1980, Oblates, bought a tiny piece of land at Nayanagar, in the midst of squatters. It was a humbling and a daring venture. Land was very low, even the surroundings. Almost every rainy season, inhabitants would suffer enormously from flood. Fortunately, De Mazenod compound was partly a bit high. Several times, during massive flood, the compound was used as shelter for the flood victims. All walks of people, irrespective of being Muslims, Christians, Hindus and Buddhists, were accommodated. When even that became insufficient, the flood victims were allowed to use the Church and verandas of the Scholasticate and OMI Fathers’ Residence.

Seeing the miserable health conditions of children, mothers and the poorest of the poor at squatters, almost all are internal-migrants to Dhaka City, Oblate Fathers invited the Sisters of Mother Teresa (MC), for health service. Once a week, two sisters would come from Holy Rosary Church, Tejgaon, and provide health care service at De Mazenod compound. After several years of their service, Prado Sisters, a missionary congregation from France, rented a house, close by De Mazenod Church and continued the health service many years. After their departure, Blue Sisters, came and continued the health service from a rented house. Since then, they have been continuing this noble ministry until now.

In 2013, after 32 years of struggle, the Oblates were able to settle down the land issue of De Mazenod Church and soon began constructing four concrete buildings or complexes. Good-hearted mission partners of Oblates shared their sacrificial and generous gifts for these constructions. Previously, De Mazenod Church, Scholasticate and the Oblate House were made of brick-soling-cum-tin-roof. Blue sisters had to stop their health care service during the construction of complexes. From 2019, they have resumed their health care service. Twice a month, Saturday, Sr. Emilia, Sr. Rita and Sr. Agnes avail themselves at the Health Centre. Once again the children, the poorest of the poor and the underprivileged, get the healing touch from sisters!