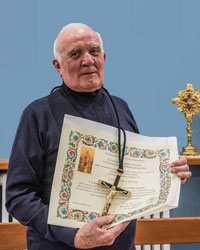 The Year of Oblate Vocations (December 8, 2017 to January 25, 2019) brought with it many graces to our Province. The reflection on the beauty of the Oblate charism and the effort to grow in a more widespread vocational culture, made us become more aware, among other things, of how much the charism of St. Eugene also has been a gift for many diocesan priests who live, at different levels, our missionary spirituality.

In line with this awareness, on January 6 of this year at the community of Marino, the Superior General, Fr. Louis LOUGEN, conferred the title of “Honorary Oblate” on Fr. Costantino Salvioni, a priest of the diocese of Frascati, Italy. 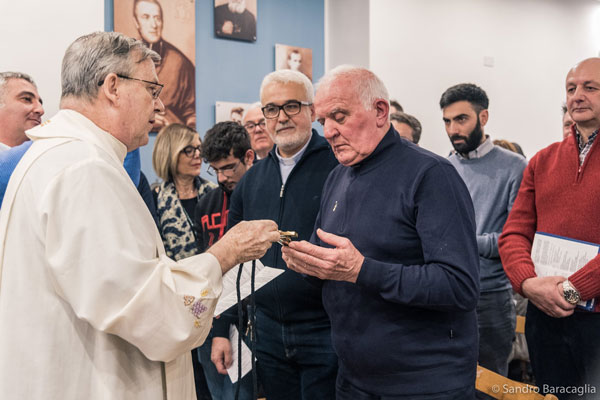 “From now on, you are an Honorary Oblate” (Photo: Sandro Baracaglia)

Don Costantino (as he is usually called) was born in the province of Bergamo (northern Italy) in 1948 and was ordained a priest on May 31, 1975 in Frascati. He was sent as parochial vicar to the parish of Vermicino, where our Scholasticate is located. It was there that he met the Oblates. The closeness and the friendship built up in those years allowed Don Costantino to appreciate the beauty of Eugene’s charism and the ability of the Oblates to be close to the people, especially to the young ones.

When he became parish priest in another parish, he did not hesitate to call the Oblates to help him in his parish’s pastoral work. For many years, he was the one who welcomed our new deacons to practise preaching and administering the sacraments, and gradually, the Oblates became the youth animators in his parish. 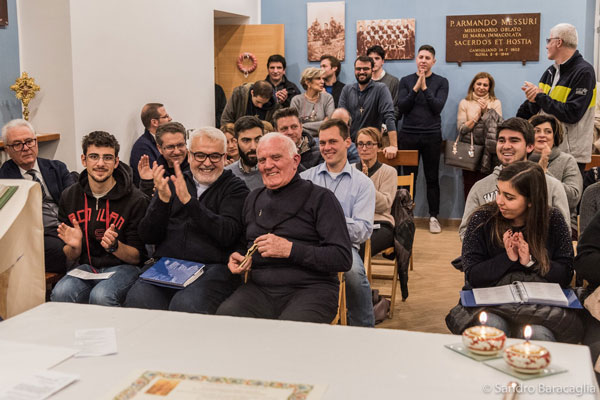 Sharing the joy with his Oblate friends (Photo: Sandro Baracaglia)

Over the years, this collaboration has become a true fraternity that helped both him and us to grow in our personal relationship with God and to build the Kingdom together.

Fr. Constantine grew in his love for the foreign missions too, thanks to the visits of the Oblates who returned from mission countries and always stopped in to celebrate Mass and meet the community. Almost every “mission market”, “charity fishing” and missionary raffle done in his parish went to finance the missionary projects of the Foreign Missions Procurator of the Province.

Over the years, Fr. Costantino has built a beautiful and deep friendship with many Oblates. Some members of the formation team jokingly appointed Fr. Costantino as an additional “formator of the Scholasticate”, given his recurrent willingness, which continues even today, to allow young Oblates to do pastoral activities with him in his parish. 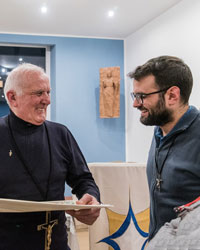 In recent years, he has participated several times with us Oblates in the week of spiritual exercises of the Province.

A special grace that the Lord enabled Don Costantino to witness was the birth of an Oblate vocation in his parish of Cocciano, that of Fr. Jacopo PAPI, OMI. Fr. Jacopo recalls Fr. Costantino’s first reaction to the news of his decision to start a vocational journey with the Oblates:

“It was very moving for me, when I told him that I would enter the Oblate Youth Centre in Marino. I still remember that he hugged me strongly, told me that he was very happy, and that I could always count on his prayers. He gave me a breviary and told me that in prayer I would understand the will of the Lord”.