The oldest Oblate Bishop passed away

Mgr. Georges-Hilaire DUPONT, dean among the Oblate bishops, passed away peacefully in Saint-Hilaire-du-Harcouët (France) on 29 January 2020.

A long-time missionary in Chad, Bishop Dupont lived exactly 100 years on earth, having been born on 16 November 1919, in Virey, France.

At the time of his death, he was the second oldest Oblate, and the seventh oldest Bishop in the world. He also held a rare record as one of the few living Council Fathers who participated in Vatican Council II. 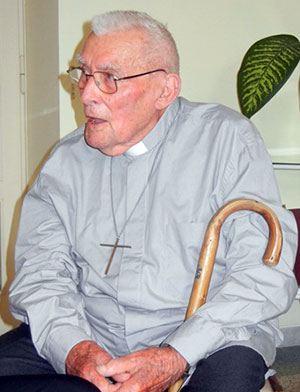 Attracted by the missionary vocation, the young Georges-Hilaire joined the Oblates in 1937, and was ordained a priest in 1943. On his return from Austria after compulsory service during war, he became part of the pioneer team of Oblate missionaries led by Fr. Yves PLUMEY that was sent to northern Cameroon and Mayo Kebbi in Chad in 1946, a region where no missionary had previously stayed.

Therefore, he started the mission from the scratch with the sole intention of evangelizing the poor. He not only took care of the spiritual needs of the locals, but also worked hard to raise their living standards, particularly in terms of education and healthcare.

He became the first bishop of the newly created diocese of Pala, Chad, in 1964, and was thus able to participate in the third and fourth sessions of the second Vatican Council.

After having served the central African country for 29 years, he resigned from his responsibility as the bishop of Pala and returned to France in 1975. He then continued to pursue his mission at the service of the Church (in areas such as Seine-Maritime and Vaucluse), as a simple “country priest”.