The Cry of the Earth and the Poor, and not the Ordination of Married Men 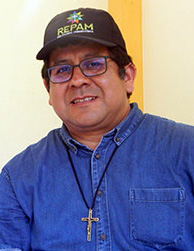 Roberto Carrasco Rojas OMI was one of the two Oblate Synodal Fathers at the Special Synod for the Pan-Amazon Region that was held in Rome in October 2019. He makes it clear that the fundamental theme of the Synod on the Amazon was not the ordination of married men, which is what the media are focusing on, but rather integral ecology, and that there is much to rejoice about in this regard. This is his vision expressed from the heart of the Amazon.

A Catholic social communicator has a responsibility to tell people the truth. The fundamental theme of the Synod was not the ordination of married men. It is unfortunate that some media that call themselves Catholic treat this topic with much morbidity, becoming part of some conservative sectors that take advantage of this type of disinformation for their own interests.

Pope Francis, in his last apostolic exhortation “Querida Amazonía” expresses the special interest he has for the Amazon, because for him, the Amazon is a living being that is suffering and is crying out in pain today, and that challenges us because he makes us see how we are treating nature.

“Querida Amazonía” (“The beloved Amazon”) is a dream come true. A dream of many missionaries who hoped that the day would come when this subject would become a serious concern for the Church.

Francis shares this dream because he has placed his eyes and his heart in a place often forgotten by the world and from there he invites us all to take up the challenge in the face of this reality. Francis loves the Amazon and knows how to express it, to the point that he begins his exhortation with some rather affective words: “Beloved Amazon”. This is the most beautiful thing that the Church has been able to express to the native peoples of a region of the world.

But this Apostolic Exhortation is a document not only for the peoples or the church of the Amazon. It is addressed to all people of goodwill. It is the fruit of a whole process of listening. A process that in the Synod has meant a time of grace. This Exhortation is complemented by the synodal contributions that were expressed, discussed, discerned and dialogued in the Final Document of the Synod. We must remember that the Final Document produced by the Synod is one thing and the Apostolic Exhortation is another, and what makes us happy is that the Amazon enters as a theme that has a strong ecclesial character.

Let us allow ourselves to be challenged by this dream of Francis. “Querida Amazonía” is a shared dream. Number 7 of the Exhortation expresses a true summary:

“I dream of an Amazon region that fights for the rights of the poor, the original peoples and the least of our brothers and sisters, where their voices can be heard and their dignity advanced.

I dream of an Amazon region that can preserve its distinctive cultural riches, where the beauty of our humanity shines forth in so many varied ways.

I dream of an Amazon region that can jealously preserve its overwhelming natural beauty and the superabundant life teeming in its rivers and forests.

I dream of Christian communities capable of generous commitment, incarnate in the Amazon region, and giving the Church new faces with Amazonian features.”

“I dream of an Amazon region…” – Pope Francis

In the fourth chapter of the Final Document of the Synod, this topic appears as a contribution of the synod fathers. It is one of the many topics that have been touched upon, but not the most important one. It is false that the Synod intended to reduce the viri probati issue as if it were the most crucial issue of this special Synod. We know that the main theme of the Synod was the “new paths for the Church and for an Integral Ecology”. Let us read number 91 of the Final Document: “With evangelical courage, we wish to implement new paths for the life of the Church and its service to an integral ecology in the Amazon”.

Other issues that challenge us

In number 85 of the exhortation, the Holy Father states, “Inculturation ahould also be increasingly reflected in an incarnated form of carrying out ecclesial organization and ministry. If we are to inculturate spirituality, holiness and the Gospel itself, how can we not consider an inculturation of the ways we structure and carry out ecclesial ministries? The pastoral care of the Church has a precarious presence in the Amazon, due in part to the immense territorial extension with many places of difficult access, great cultural diversity, serious social problems, and the option of some peoples themselves to be secluded. This cannot leave us indifferent and demands a specific and courageous response from the Church”.

There are serious problems in Pan-Amazon territory and that is why the church is required to respond in the same way that Jesus responded to His Father. We cannot stay in the comfort zones of our homes, cars, armchairs or Upholstered Beds. We have to abandon that and reconfigure our mystery of service.

Now it is up to the bishops and the superiors of religious congregations to adopt this teaching and send prepared missionaries to the Amazon.