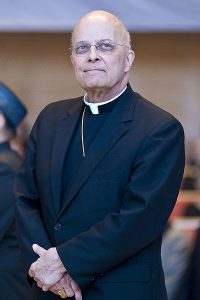 The fifth anniversary of the death of Cardinal Francis E. George, OMI, falls in the midst of a global pandemic. In the wake of the novel coronavirus COVID-19, we are faced with new difficulties as well as new versions of pain and suffering, and we wait to see the effects these weeks of social distancing, disease and death will have not only on us personally but on ecclesial life in the world.

I think now what I have often thought in the years since his death: What would Cardinal George say? Or, to play off the title of one of his most memorable works, What is the difference Cardinal George makes? Without putting words in his mouth, I think we can take some educated guesses, based on his life and legacy.

Cardinal George’s life can teach us a great deal, especially about the importance of trusting in Divine Providence and the acceptance of suffering — both of which are clearly in the disruption polio brought into his life.

When 13-year-old Francis George contracted polio, his longtime dream of becoming a priest for the Archdiocese of Chicago was over. Told he couldn’t be ordained there because of his disability, he was devastated. But it didn’t take long for him to find a workaround and, he went to study at a seminary operated by the Oblates of Mary Immaculate. The Congregation welcomed him with open arms.

He quickly rose to a series of leadership positions in the Oblates, which included 12 years in Rome as Vicar General for the Congregation. During those years, Cardinal George had many occasions to visit Oblate missions throughout the world. He traveled down rivers on log rafts, slept on dirt floors and was detained by border authorities, deported and even caught in crossfire.

But that Cardinal George ended up finding a religious home with the Oblates was clearly the work of providence, for members of the congregation take a fourth vow, in addition to those of poverty, chastity and obedience — that of perseverance.

As he got older, the effects of post-polio disease became more debilitating, and he eventually needed a heavy leg brace to stabilize his walking. As a result, the limp that he had had since childhood became more pronounced. As his sister, Margaret, would recall, he never went a day without severe pain. But he didn’t let it define him. As a young victim of polio, he was given the following advice, which he often shared: “There is always someone who is worse off than you. Don’t ever feel sorry for yourself.” He took that advice to heart and lived it daily.

As we face the unknowns of the coronavirus pandemic, we can look to Cardinal George’s example of great perseverance and continue, ourselves, to push through this time of inconvenience, fear and suffering.

Understanding the purpose of suffering, Cardinal George eventually came to explain his crosses as “gifts” and knew that it helped unite him with the crucified Christ. As he once said, “Christianity without the cross is a false religion. Jesus is not a good-luck charm; he is Lord of heaven and earth because he has laid down his life and taken it up again.”

Cardinal George was a man of intense curiosity, expansive breadth of knowledge and a deep, abiding faith. And he was greatly concerned about the divisions within the Church. Rather than dwelling within the realm of “liberal or conservative,” he preferred the dichotomy of “true or false.”

“We’ve sometimes reduced the Church to a set of ideas rather than an encounter with Jesus Christ and with his brothers and sisters in our parishes, our diocese and the world. Church becomes a debating society, people take sides and rack up points,” he once said.

By the way he lived, taught and governed, Cardinal George put into practice what he called “simply Catholicism,” a robust vision for ecclesial faith and life, devoid of polemics and tribalism. His hope for the Church is perhaps even more ambitious now than in 1998 when he first articulated it:

“The answer is simply Catholicism, in all its fullness and depth, a faith able to distinguish itself from any cultures and yet able to engage and transform them all… The Catholic faith shapes a church with a lot of room for differences in pastoral approach, for discussion and debate, for initiatives as various as the peoples whom God loves. But, more profoundly, the faith shapes a church which knows her Lord and knows her own identity.”

During times of crisis, it is easy for divisions to become even more pronounced. Instead of giving in to continued infighting and discord, we would do better to follow Cardinal George’s urging toward unity and let our thoughts, words and deeds be simply Catholic.

“Catholicism is first of all not a set of ideas or a collection of causes. It is a way of life, a way of following Jesus Christ.” Cardinal George said.

When we follow Christ more closely, “it will not only change the way we think and see, it will also change the way we live and act. … Disciples change their way of life in order to remain in contact with their master, in our case, Jesus of Nazareth, Son of God and Son of Mary,” he wrote.

There is nothing like a time of trial to help us become better disciples of Jesus Christ. In addition to his post-polio struggles, Cardinal George had two bouts with the cancer that ultimately led to his death. The sufferings of his life were not obstacles to his discipleship, however. Rather than serving to embitter him, they were opportunities for him to grow in his relationship with the Lord.

Cardinal George lived his life with the knowledge that God made each of us to be holy and lived accordingly. “We are here to become saints,” he said. “Everything else is of very, very secondary importance.”

There is so much we can learn from Cardinal George, even five years after his death. His perseverance amid suffering, his pursuit of truth and proclamation of who Christ is, his ability to read the signs of the times and his hope that the Church can be more true to its mission: that is the difference Cardinal George can make in our present moment. As much as when he was alive, Cardinal George remains to be a man for our times.

Michael R. Heinlein is editor of SimplyCatholic.com and author of a forthcoming biography of Cardinal Francis E. George, OMI.