OFFICE OF THE GENERAL POSTULATION

On July 6, 2020, the new Postulation Committee met at the OMI General House in Rome. This Committee is not a novelty in our Congregation: previous Postulators General had had a Committee as well. However, it had been more than a decade, perhaps about 15 years, since a Postulation Committee met. The appointment of a new full-time Postulator General allows us to expect an exclusive and intense dedication, which has led to the recovery of the reality of the committee. Its functions are defined by the internal regulations of the General Administration:

“The Postulator General is assisted by a committee, appointed by the Superior General, with whom he meets regularly and from which he receives advice on specific questions related to the causes he is dealing with” (General Administration, “Handbook”, nº 7.2.2 )

Thus, with the Postulator General, Fr. Diego SÁEZ MARTÍN (Spanish, General Administration), the new members of the committee met at the General House in Rome: 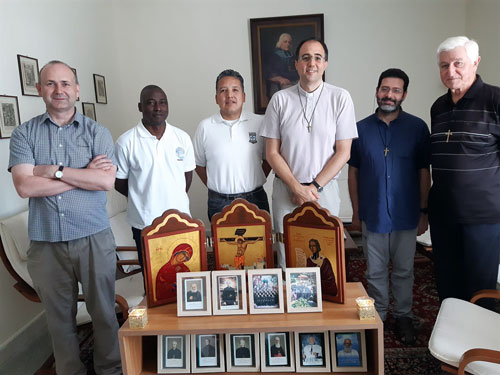 Putting in common the missionary and personal gifts of each one, we have a group with extraordinary wealth for the entire Congregation. For example, Fr. Dino’s 20 years of missionary life in Asia (Indonesia), in addition to his missionary enthusiasm still very present (he visits all the seminaries in Italy to do missionary animation on behalf of the country’s Pontifical Mission Societies), and his many simple and engaging publications on our great Oblates that he has been publishing in recent years. Or the knowledge of the needs of the formation houses around the world provided by Fr. Benedicto and David (who has been a formator of the scholasticate of the Mediterranean Province for many years, and which has been welcoming scholastics from all over the world, especially Europe). The geographical reality is also well represented, with members from three of the five regions of the Congregation. Frs. Dino, Benedicto and Diego have the experience of having lived in the other two regions. We could mention the technical knowledge that Fr. Bizama can bring, as he is doing specialized studies on information technology… And we could also mention many other aspects that constitute fantastic resources at the service of the Postulation for the good of the Congregation.

Fr. Louis LOUGEN, the Superior General, accompanied us at the beginning and at the end of the day, leading the opening prayer in which he blessed us with the Cross of Saint Eugene, and in closing around the relic of the Founder’s heart. Since he will not always be able to accompany us physically, he wanted to leave us a person on the Committee who, as his representative, can make us feel his constant closeness: Fr. Antoni BOCHM, General Councilor for Europe.

In summary, as some of us have said, a small family of Oblates is being born with a common passion, with the desire to make known and love the great and rich spiritual heritage of the Congregation.