The Holy Oblate is still alive!

OFFICE OF THE GENERAL POSTULATION 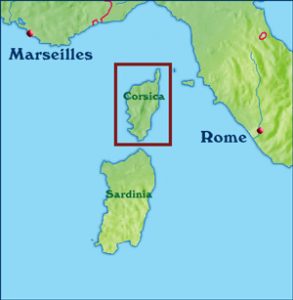 On May 20, 1839, one of our first Oblates died in Vico (island of Corsica) France: Father Dominic Albini, OMI.

Vico’s people began to say in the streets “The Saint is dead, the Saint is dead!” In a few hours, everyone in Corsica knew the news, even at a time when there was no Internet or television. Furthermore, the news quickly reached Menton and Nice, the cities of the French Riviera located on the other side of the sea that separates Corsica from southern France, where the Oblate had been born and lived respectively. As soon as the news was known in this part of the continent, the local clergy immediately commissioned local artists for the first two of the images of Fr. Albini that have been preserved. They were even ahead of Eugene de Mazenod and the Oblates, who only a short time later ordered the third original portrait that we have today! Such was Fr. Albini’s reputation for holiness. 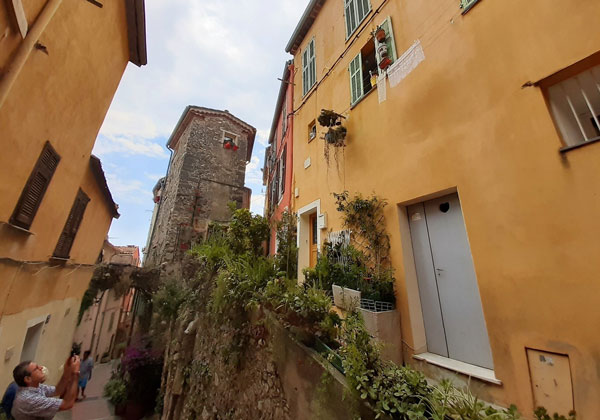 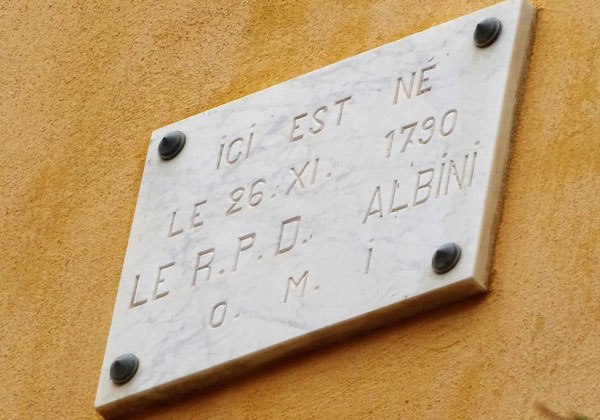 Commemorative plaque on the façade of Fr. Albini’s birth house

Even today on the island of Corsica, Fr. Albini is still called «El Santo» (the saint). It was Saint Eugene de Mazenod himself who sent two illustrious Oblates, Fr. Joseph-Hippolyte Guibert, OMI (who would later become Cardinal-Archbishop of Paris) and Fr. Stephen Semeria, OMI (who would later become Bishop of Jaffna, Sri Lanka) to collect all possible information and documents of Fr. Albini. The Founder of the Oblates was convinced that, one day, the Congregation would open his process of beatification and canonization. In fact, this was the first Cause that the Oblates opened. 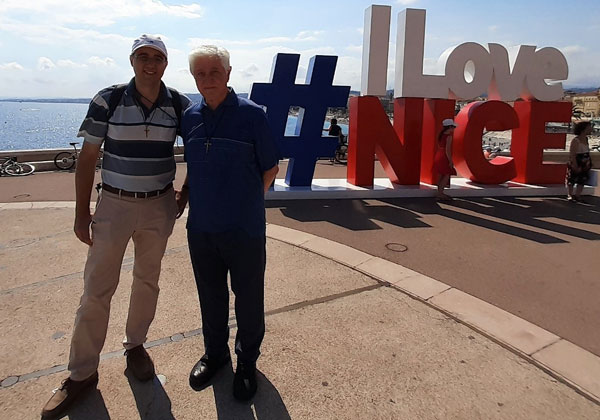 From July 15 to 20, 2020, Frs. Diego Sáez Martín, OMI, Postulator General, and Dino Tessari, OMI, member of the Postulation Committee, were able to verify «in situ» that El Santo is still very much alive in the hearts of the people and in our Oblate spiritual heritage. We went to visit the places related to Fr. Albini in the south of France, to check the state of things, to do research and to take photographs for an upcoming book and photo album that Fr. Dino hopes to publish soon. 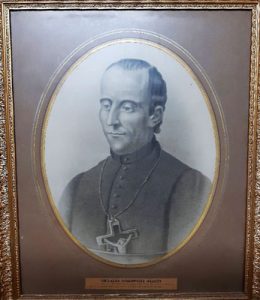 In Menton, we saw the house where Fr. Albini was born in 1790, the facade and surroundings of which have been well arranged in recent years. It was with great joy that we saw that a copy of a portrait of Fr. Albini was prominently displayed in the Minor Basilica of Saint Michael, and there is a prayer to Venerable Albini next to the painting.

The most encouraging thing about our visit to Menton was to see that, even today after many years of oblivion, one of the first three portraits of the Albini that we spoke about earlier, can still be found in the sacristy of the Chapel of the Immaculate, located in the basilica square. A few decades ago, it was known to be still there, but we had no pictures of it. Fortunately, we were able to photograph it this time around. 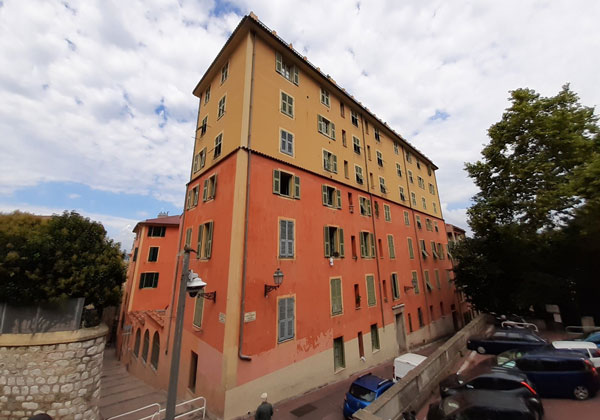 Old seminary in Nice, in which Fr. Albini was a teacher when he met the Oblates 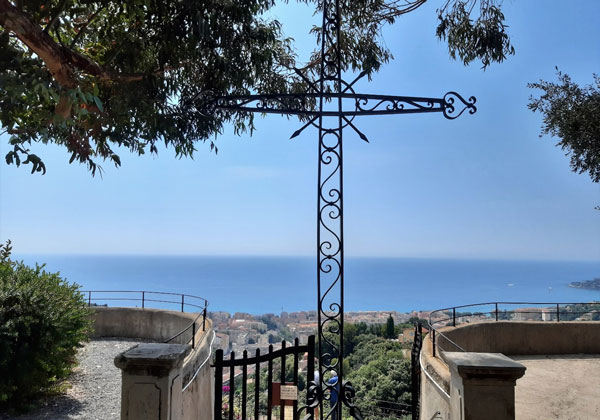 Shrine of Our Lady of the Annunciation, from which Fr. Albini, as a child and later as a priest in mountain villages, could see the island of Corsica.

In Nice, we were able to follow his footsteps through the major seminary in which he studied, the Franciscan Studentate on the outskirts of the city, in the section named Cimiez, located in the Monastery of Our Lady of Cimiez. From the Shrine of the Annunciation located in the mountains bordering Menton, where he used to go with his father as a child and from which he could then see the Island of Corsica, we had the opportunity to see some of the mountain towns where he served as a priest during his early years of ministry. 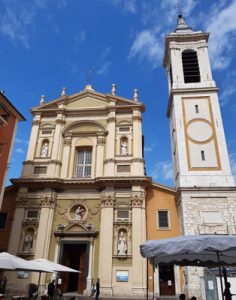 We were able to visit the Nice Cathedral, the Cathedral of St. Reparata, where, in 1814, he was ordained a priest and where he exercised his ministry for a brief time, also being a professor in the new seminary of the diocese. Incidentally, there were no photographs of the seminary either, as it is not a well-known place in Nice, since it the building was used only for a very short time as a seminary, before the seminary was transferred to another place. After much research, we were able to find the building and managed to photograph it, thus improving the Oblate photographic archive.

A very exciting moment was our visit to the Shrine of Saint Pontius (Saint-Pons). This was where, in 1824, Don Dominic Albini, a diocesan priest, found two missionaries who had come to the aid of the parish priest of the cathedral of Nice. The parish priest attended to a group of 150 troubled young people with a dubious moral life. To help them find Christ in their lives, he had asked for help from a group of newly-founded missionaries: The Missionaries of Provence, who would later be known by our present name: The Missionary Oblates of Mary Immaculate. Don Dominic was to help the parish priest and the two missionaries in preaching to the youth for a whole week. So he lived with those two missionaries during those days and liked everything he saw in them: their missionary zeal, their ardent preaching in simple language to the young people, and, above all, the time spent in common prayer, fraternal charity, good spirit at meals and during recreation. Who were those two Oblates? None other than Saint Eugene de Mazenod and Fr. Suzanne. And Don Dominic requested to enter this new congregation, becoming Father Dominic, Missionary of Provence and later, Oblate of Mary Immaculate. 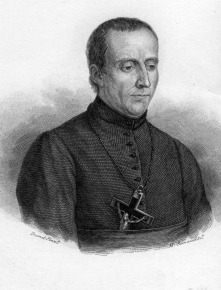 In 1834 he would be sent to the island of Corsica (France), where he would be known to all, until today, as a man of God, as ‘the Saint’… However, this will be another story that we will be able to tell, God willing, after a new journey of the Postulation in the footsteps of Venerable Dominic Albini OMI on that beautiful island.

We thank the Oblate community in Nice, especially Fr. Alfonso Bartolotta, OMI, and Br. Mariusz Lorenc, OMI, who welcomed us with remarkable fraternal hospitality and who accompanied us to the places, making the visit easier and more pleasant. Incidentally, the sanctuary of the Sacred Heart that they serve is a garden of peace in the middle of the tourist center of the city, and they are also making an effort to make the figure of Fr. Albini better known, having placed his image in one of the side chapels. 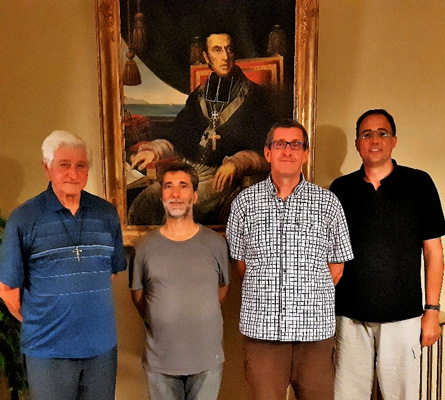 Fr. Albini today is Venerable, that is, the Church has already said that he truly lived heroically as a Christian, a religious, and a priest. The only thing that separates us from beatification and then canonization is being able to present a well-documented miracle to the Holy See. Please ask for the intercession of Fr. Albini, and communicate any favors received to the Postulation office.

The General Postulation has a Facebook page where you can find these and other material on Fr. Albini and on other important Oblates: https://www.facebook.com/PostulatioOMI/