In the 1950s, Fr. Józef Pielorz, OMI made an album with all the images of Eugene de Mazenod that he could find. However, he could leave us only two photographs on two pictures, because, unfortunately the original pictures were already lost at that time with the inscription: “Are they a painting, a sketch, a design? We do not know who made them, when they were made, or where the originals are kept”. 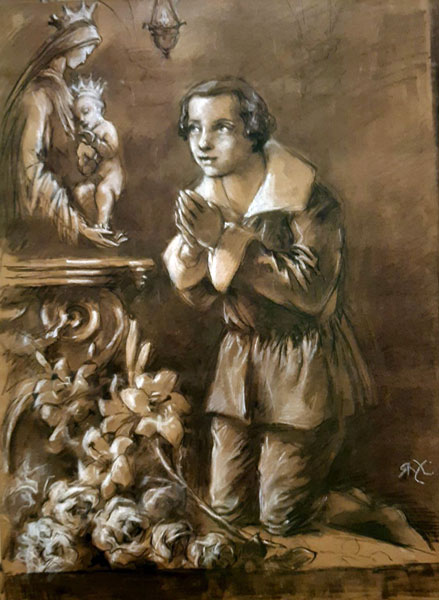 Since then no one, it seems, had found them. Two months ago, they appeared, by chance or by Providence, in the General Postulation Office. We have restored them and made a frame.

They are two drawings made in charcoal and pastel. We do not know the author. If they were already lost in the ‘50s then my personal opinion is that they were made between 1920 and 1940, either for the 100 anniversary of the experience of Eugene de Mazenod on August 15, 1822, or when the process of his beatification and canonization was opened in 1935. They are signed with a curious signature: “ЯХ.”. I wish someone could tell us more about this author.

First picture: “Young Eugene de Mazenod’s devotion to Mary in Venice” (charcoal and pastel, 62×46 cm, approximately.). It is a free interpretation of Eugene de Mazenod’s Marian devotion at Venice (1794-1797). A drawing of Eugene as a boy kneeling before a statue of the Blessed Virgin holding Jesus in her arms. With hands folded, the child gazes into the eyes of the Blessed Virgin with an evident expression of confidence and simplicity. In Venice, Eugene encountered Don Bartolo Zinelli who composed a rule of life for him focused on Christ and Mary in order to introduce him to the life of faith. His rule urged him to ask Mary to assist him in all his actions. Jesus was presented in the Rule as one who had placed his entire confidence in Mary. Eugene was supposed to follow this example “in union with the sentiments of his adorable heart.” 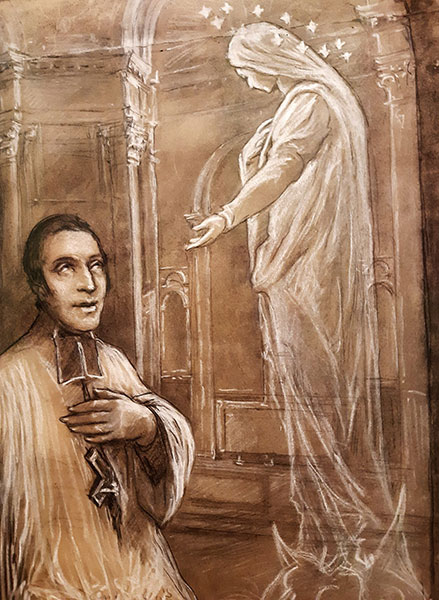 I found them in early June 2020 in the lower part of a cupboard, at its bottom, of the Postulation archives, rolled up and without any special wrapping. I commissioned its restoration, conservation and framing with the help of Father Fabio Ciardi and his niece.

These pictures were blessed in the Chapel of the General House, Rome by the Superior General, Fr. Louis Lougen OMI, in a ceremony held after the Holy Mass on occasion of the solemnity of the Assumption of Mary and of the 198 anniversary of the experience of our Founder before the statue of Our Lady preserved today in our Chapel and then, they were placed in the small chapel that keeps the most important relic of St. Eugene de Mazenod, his heart. So, this chapel presents a new look now.

Being close to the people when it is most needed
Virtual Lourdes Pilgrimage 2020: 19th-23rd of September