The work of an Oblate during the Spanish Flu

Over the past few months, the world has grappled to respond to the COVID-19 pandemic. During this time, many parallels have been drawn between this current crisis and the outbreak of the Spanish Flu following the end of the First World War in 1918.

A brief comparison with the Australian experience during 1918 to 1919 provides insight as to how well the current health crisis has been managed by both civil and community leaders across the country.

The Spanish Flu reached Australia in late 1918 and spread throughout the country during 1919. Over the course of the pandemic, it affected about 40 per cent of Australians and resulted in the death of around 15,000 people at the time the population was over 5 million. On a global scale, the disease killed more than 50 million people and was most prevalent among adults aged between 25 and 34. Island communities, such as Australia, imposed strict quarantine measures to quell the spread of the disease. Government authorities screened incoming vessels from overseas and quarantined local outbreaks. An important quarantine station in Western Australia was at Woodman’s Point near Fremantle.

A ship called the Boonah arrived in Western Australian waters on 11 December 1918 and on board were 1,000 Australian soldiers of which 300 were infected with the Spanish Flu. The Boonah had left Fremantle with Australia troops assigned to fight in the Middle East during the First World War. The ship reached Durban, South Africa, three days after the armistice ending the war was signed. In Durban some passengers contracted the flu.

On return to Fremantle, the Commonwealth Government initially refused to allow the vessel to dock. A few days later, 300 soldiers disembarked on to a ferry and were brought to Woodman’s Point, where temporary hospitals were established for the sick soldiers. Woodman’s Point was within the boundaries of Fremantle Parish, which was under the care of the Oblates of Mary Immaculate. In mid-December, Fr John Flynn OMI, the priest at St Anne’s in North Fremantle, volunteered to attend the quarantine station at Woodman’s Point.

Fr. Flynn was born at Stamullen, County Meath, on 10 December 1869 in Ireland. He was ordained in 1894 at Liege and sailed for Australia in 1899. Newspaper reports from the period record that Fr Flynn embraced his work with the soldiers at Woodman’s Point wholeheartedly. A Dutch-Lutheran and a Scotch­ Presbyterian soldier were interviewed following their release from the station and they expressed admiration that Flynn provided pastoral care to all soldiers regardless of their religion and he tried to cheer up all his visited. 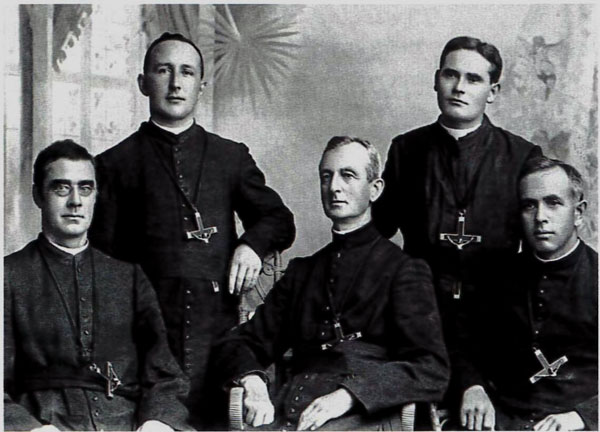 During his first stint at the quarantine station in January 1919, Flynn had caught the influenza himself, but he managed recovered quickly following time on self-isolation. Despite the risks to his health, in March 1919 Flynn returned to the station again to provide spiritual care for dying solders. This was followed by another period in isolation before Flynn returned to work as the priest at North Fremantle. In June, Flynn made the brave decision to return to Woodman’s Point a third time and miraculously survived further infection. Flynn’s work at the station was heralded as among his great achievements in Western Australia when he was farewelled before returning to Ireland in 1921.

As we continue to navigate our way through these challenging times in 2020, it is important to look at how others have responded with generosity in equally difficult times. Fr John Flynn OMI decided to place himself at the centre of the Spanish Flu crisis in Western Australia and in a position of service to those who most needed it.

The men who Flynn served had sought to serve our nation at its hour of need. A total of 27 soldiers and four nurses died at Woodman’s Point. Flynn’s example is a salient reminder of Christian generosity in the face of adversity.