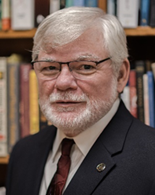 In January of 2020, Scott was invited by the Board of Trustees to accept the position of Oblate School of Theology’s 19th President.

Dr. Scott Woodward, who has been the Vice President of Academic Affairs and Dean the school for the past ten years, was born in Baton Rouge, LA. He and his wife, Cathy, of 42 years, have three children and one grandchild. Scott attended Seattle University where he received a BA in Religious Studies (1980) and a Masters in Religious Education (1984). After moving to San Antonio, he attended St. Mary’s University where he was a Distinguished Graduate with a MA in Biblical Theology. He then enrolled at Oblate School of Theology where he was awarded his Doctor of Ministry degree in 2004.

OST has been home for Scott for the last 30 years. He has worked with the school’s Lay Ministry Programs, has directed the MA in Pastoral Ministry, and, prior to becoming Dean in 2010, served as Associate Academic Dean. He has done extensive work in ecumenical and interreligious dialog; teaching in the area of pastoral theology, including ecumenism, lay formation for ministry, Vatican II and its reception and Church history.

When asked what prompted him to accept this responsibility, he shared: “The Oblate way of life and Charism to serve the poor and abandoned has kept me in the Church. It is that simple. It has repeatedly offered a view of Church and the gospel that focuses on the poor, the immigrant, the sick; not a Church triumphant, but a Church in service. This the Church I imagine as I read the gospels. I feel as if I owe a debt to those who have kept this alive and kept it alive in me. If the Church loses this, we lose who we are and we lose a valuable aspect of evangelization. I have a few years left to be part of helping this continue.”

Dr. Woodward has been involved for many years in both ecumenical and interfaith dialogue and his concern for other Christian denominations and other religions will be a feature of his presidency. Under his vision and leadership, Oblate School of Theology will continue to expand its vision to honor the fact that “Catholic” means universal. So that, while the school will continue to cherish its own Catholic specificity, it will be a place of welcome, of openness, of research, and of friendship for all Christian denominations and for all religions.

Rev. Fr. Lou Studer, OMI, Chair of the Board of Trustees, is enthusiastic about this appointment and shares simply: “Scott is an excellent choice. He has an Oblate soul. The school is in good hands.”

Rev. Fr. Ronald Rolheiser, the outgoing president, says this about Dr. Woodward’s appointment: “I couldn’t be more pleased with the selection of Scott as my successor. He knows the Oblate charism, cherishes it, and he has lived it out his entire adult life. Like Jesus, he wants the gospel to be, first and foremost, good news for the poor. He has a genuine Catholic heart, one with many rooms. I look forward to where the school will go under his leadership.”

His official installation will take place on Friday evening, October 23rd, at 7:00 PM and the event will be live-streamed from the Chapel of the Immaculate Conception on the Oblate School of Theology campus.

Provincial Council of the Philippines
Forward Together: Listening for the Spirit