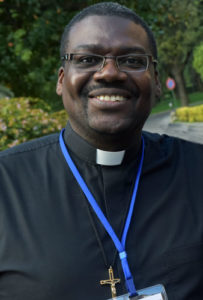 The Superior General has appointed Fr. Jean-Hérick JASMIN, OMI, of the Province of Haiti, as Director of the General Service for Justice, Peace and Integrity of Creation, for a first term of three years. He made this decision during the last Plenary Session (September-October 2020), with the consent of his Council.

In the same year, 2003, Fr. Jasmin received his first obedience to the Oblate mission in Colombia. He was first the socius and then the director of formation in Colombia for 9 years.  In the meantime, he completed his master’s degree and the doctorate in Theology of Action, at the Javeriana University from 2007 to 2014.

He has also been a member of the Conference of Religious of Latin America (CLAR), as a theologian and adviser since 2007 and has written many articles on Religious Life in many Spanish language magazines.

Fr. Jasmin has also gained ample experience as a pastor in various parishes. In 2014, he was vicar at San Mario, and since 2017, he has been the parish priest at Madre del divino Amor, a parish of Mestizos and Afro-Colombians. Added to that, he has rendered his services as Archpriest of Consecrated Life in the Vicariate of San José since 2019.

During the 2016 Chapter as a moderator

Fr. Jasmin participated in the OMI General Chapters of 2010 and 2016 as a translator and as a moderator respectively. He was also a participant at the inter-chapter held in Obra, Poland, in 2019.

It is hoped that he will be in Rome by early next year to take up residence at the General House.

After the sudden death of Fr. Kennedy KATONGO, the former Director of JPIC, in September 2016 (on the inauguration day of the 36th General Chapter), it was Fr. Guillaume MUTHUNDA (General Councilor for Africa-Madagascar) who coordinated the service ad interim up to this date.