Bishop Victor GNANAPRAGASAM, OMI, first Apostolic Vicar of Quetta, province of Baluchistan, Pakistan, passed away from this world on 12 December, 2020. He was the first and only Oblate Bishop from the Provincial Delegation of Pakistan. 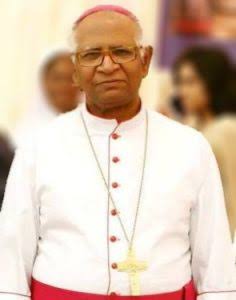 Victor Gnanapragasam was born in Jaffna, Sri Lanka on November 21, 1940. At the age of 19, he entered the Oblate novitiate in Kalutara, Sri Lanka, and received the First Vows on May 31, 1960. After completing the studies of philosophy and theology at the Major Seminary of Our Lady of Lanka in Kandy, he was ordained a priest on December 21, 1966.

First he served as assistant parish priest in Oblate mission, Nilaweli, diocese of Trincomalee-Batticaloa (1967-1969); and then as a member of the community of Oblate Preachers in Jaffna (1969-1973).

It was in 1973, the young priest Fr. Victor was sent to  Pakistan as a missionary. Since then, until his death, he dedicated his whole life to minister to the people of God in Pakistan.

His pastoral commitment was in many capacities: as Parish Vicar or Parish Priest in various parishes; as Formator the Oblate Formation Houses in Multan and Karachi; and as Major Superior of the Provincial Delegation of Pakistan.

His Superiors also sent him abroad several times for further studies: Studies in Youth Ministry in Manila, Philippines (1977-1979); Psychology and Spirituality at St. Anselm Institute in Kent, England and then later courses in Spirituality at the Angelicum, Rome (1989-1992).

As the Christian community in Quetta was developing fast in many ways, spiritual, social and political, a new Apostolic Prefecture of Quetta was established on by His Holiness John Paul II on December 07, 2001. Fr. Victor was appointed the first ever Prefect. In that capacity he was at the Vatican for the ad limina Apostolorum visit of the Pakistani Bishops in June 2008.

On 29 April 2010 Pope Benedict XVI elevated the Apostolic Prefecture of Quetta, to the rank of Apostolic Vicariate, and Fr. Victor was appointed as its Apostolic Vicar. He was consecrated Bishop at Saint Patrick’s Cathedral, Karachi on 16 July 2010, by the then Apostolic Nuncio to Pakistan Archbishop Adolfo Tito Yllana. 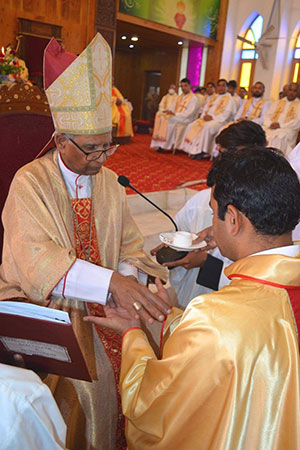 Quetta is the Capital city of the Province of Baluchistan. It was in 1982 that the Oblate accepted a mission in Quetta for the first time. During that time it belonged to the diocese of Hyderabad.

This volatile province has witnessed in recent past suicide bombings, sectarian violence and at times religious-based discrimination as well. On several occasions, Bishop Victor narrowly escaped from bomb blasts and attacks. In 2013, he sustained injuries as a result of a suicide bombing that took place at the vicinity of the Bishop’s House.

Bishop Victor served the Apostolic Vicariate of Quetta during the war in neighbouring Afghanistan, which was one of the biggest challenges during his episcopal ministry. As his Vicariate covers vast dessert mountainous areas which are controlled not only by the Pakistani military but also by Balochi rebels, always requires careful movements of priests, most of the time risking their own lives.

In spite of all those challenges, he was always close to his flock and made all efforts to attend their spiritual, pastoral and material needs often by visiting them and being with them. In the recent past, he suffered cardiac issues and despite his ailments, he continued to attend the needs of his Vicariate.

Bishop Victor has left behind a rich legacy to the people of Pakistan, especially the poor, the local church, to the Delegation, to Sri Lanka and at large to the Congregation.

Let us pray for the eternal rest of this great missionary Bishop who has served one of the most persecuted Christian Communities in the world. May his soul rest in peace and consolation to the entire OMI family in the Delegation of Pakistan!

Cardinal Luis Antonio Tagle, Prefect of  the Congregation for the Evangelization of Peoples, sent a message of condolence to Fr. Louis LOUGEN, our Superior General: