150th anniversary of the apparition of Our Lady  of Pontmain

On Sunday, January 17, 2020, in Pontmain, France, we celebrate the 150th anniversary of the apparition of Our Lady to four children.

It happened in the context of the war between France and Prussia, when many of the young men from the village of Pontmain were involved in the battle and their families had no news about them. The Prussian army was already very close to Pontmain. The parish priest, along with the people of the village, was praying every day for their safe return and for the end of the war.

January 17, 1871, in the late afternoon, a Beautiful Lady appeared to the children and said to them: My children: Pray. God, in short time, will hear you. Your prayer touches my Son. 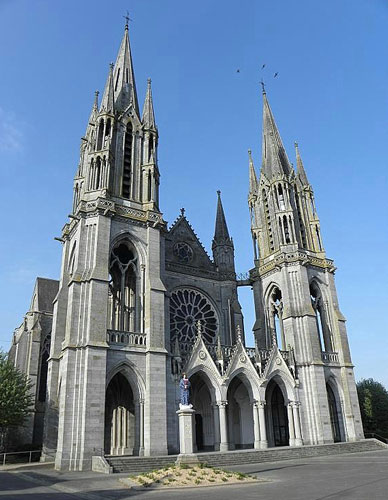 And in short time, the war ended and the young men of the village returned to their homes safe and sound.

The apparition was officially recognized one year later in February 2, 1872.

The Oblates were present in Pontmain, already in 1872. Oblates were invited to take care of the growing number of pilgrims and to build the church, which was consecrated in 1900 and made a minor basilica in 1905. Even now, Oblates continue to serve the pilgrims coming to pray at the shrine. One of the visionaries later became an Oblate.

The celebration of the anniversary was planned as a very solemn event and was supposed to last the whole year. Unfortunately, the pandemic caused that to be greatly curtailed.

Solemn Mass in the shrine on Sunday 17, 2021 at 10.30 AM will be celebrated by Cardinal Parolin and transmission will be on You Tube and television via KTO TV or KTOTV.COM

For more information about the shrine and about the program of the celebration visit the link: www.sanctuaire-pontmain.com