Fr. Alexandre Taché, a well-known canonist and a former Procurator General of the Missionary Oblates of Mary Immaculate passed away from this world in Richelieu, Quebec, Canada on February 7, 2021.

His introduction to the Oblate world was through his studies at the University of Ottawa, as well as in the two parishes where he lived: Sacré-Coeur in Ottawa and Notre-Dame-de-Grâce in Hull. His ancestors also include a famous archbishop of Saint-Boniface, the uncle of his grandfather, in the person of Mgr. Alexandre-Antonin Taché OMI. He might have been a determining influence in his vocational choice. Thus, in 1943, Alexandre entered the Oblate Novitiate in Richelieu, and he pronounced his first vows a year later.

He returned to Ottawa to continue his studies for the Licentiate in Philosophy at St. Joseph’s Scholasticate from 1944 to 1947. Young Bro. Alexandre pronounced his final vows on September 8, 1947 at Saint-Famille Church in Ottawa.

He was then called to Rome to the International Scholasticate where he studied theology at the Gregorian University, obtaining his Licentiate in 1951 and his Doctorate in 1960. 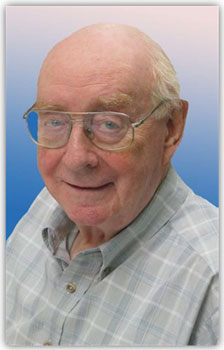 Returning to Canada in 1972, Father Taché joined the staff of the University Seminary at Saint Paul University in Ottawa. He then obtained a Licentiate in Canon Law and taught this discipline from 1974 to 1994. During these years, he was, among others, President of the Commission for the Revision of the Oblate Constitutions and Rules (1975-1980); President of the Christian Council of the Capital; judge at the Regional Ecclesiastical Tribunal of Ottawa, and later at the National Appeal Tribunal of Canada; Assistant Secretary of the Ontario Conference of Catholic Bishops; and Vice-President of Saint Paul University (1983-1988). From 1988 to 1994, he was General Secretary of the Canadian Conference of Catholic Bishops.

In 1994, Father Taché was recalled to Rome as Procurator General of the Oblates to the Holy See, a position he held until his return to Ottawa in 2003.

In 2010, when was then 84 years old, he received his obedience for the Résidence Notre-Dame de Richelieu.  He lived there for 10 beautiful years, where he was able to receive the care his condition required, while maintaining a certain intellectual activity.

For the past several years, his mobility has been reduced to a wheelchair. However, until the very end, he has been intensely involved in the service of others in his own simple ways. He has not wasted the time allotted to him!

Fr. Alexandre was certainly an incredible gift of God to the Oblate Congregation and the Church at large. He did not refuse efforts, work, and moves to serve wherever he was invited to serve his brothers and sisters. Now that he has left our world, we pray to the Lord to welcome him with kindness and warmth and give him the eternal peace that he always hoped for.

The new date of the 2nd Oblate Lay Associations Congress
“A Voice in the Desert. The Oblate Mission in the Sahara”.