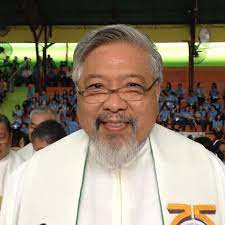 Fr. Eliseo “Jun” Mercado, Jr. OMI, the first Director of the General Service of Justice, Peace, and Integrity of Creation based in Rome, Italy, from 2003-2007, passed away on May 23, 2021 in Cotabato City, Philippines.  He was 6 days short of his 73rd birthday.  He had been an Oblate religious for 54 years, and a priest for 47 years.

Jun was formed as an Oblate both in Manila and in Rome, and acquired post-graduate degrees in Missiology and Islamic Studies.

Jun served in various Oblate ministries in the Philippines–in the parish, in schools, in mass media, in peace advocacy, in inter-religious dialogue, and in spiritual direction of seminarians.

In his early years as an Oblate, Jun was active in opposing the dictatorship of President Ferdinand Marcos.  He was most well known and recognized, however, for a life lived in solidarity with Muslims in southern Philippines, and for espousing their right to self-determination.

At the time of his death, Jun was the Philippine Province’s Archivist, residing at the Oblate Novitiate in Datu Odin Sinsuat, Maguindanao.  He also continued in his advocacy work as Senior Policy Adviser of the non-government Institute for Autonomy & Governance.

A new Oblate Bishop on the feast day of the Founder
“Dreaming Together”: Reflection on climbing Mount Sindoro