Consistent with a goal of empowering lives through education, Oblate School of Theology (OST) partnered with the Texas Department of Criminal Justice, the Archdiocese of San Antonio and the Ministry of the Third Cross to offer a transformational educational experience for incarcerated individuals.

“We were the first Catholic institution of higher education in Texas to offer a program of adult faith formation in a prison, and we now have multiple places asking if they can be part of the program,” said Dr. Scott Woodward, President of OST. 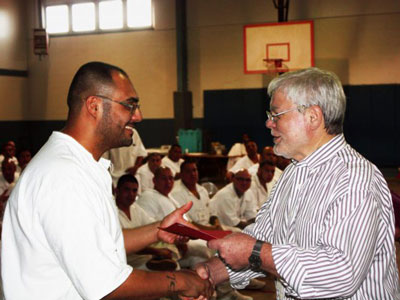 OST President, Scott Woodward (R) with one of the men at the facility

School officials created the two-year program as a way for motivating offenders within five years of parole eligibility to reflect on and study the faith in order to change their lives for the better, both during their incarceration and after they are released.

The goals of the prison-based program are to reduce recidivism, reduce violence both inside and outside the walls and reduce the number of infractions by offering offenders a new way of life.

The second year includes opening and closing retreats and three sections known as “schools.”  There are schools for prayer, pastoral skills and Scripture.  The focus in year two is on conflict resolution, communication, leadership, forgiving oneself, dealing with change, collaboration and valuing differences.

The dedication and discipline required to complete the two-year program has had a meaningful impact on participants’ lives as they contemplate their parole or release.

One inmate, David, expressed delight with the course because instructors answered all questions and treated participants respectfully.  “It gave me a better understanding of the universal church and of prayer.  I could go on for days about how great this program is and its benefits,” said David.

Another inmate, Marcos, said he enjoyed learning about Catholic history and the rosary.  “I learned the importance of being able to commit myself to something and be responsible,” said Marcos.  “I am very blessed to have gone through this program.” 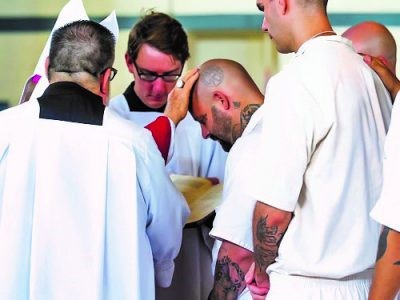 The Menard Correctional Facility in Illinois is home to 3,700 inmates, many of whom will spend the rest of their lives in prison.  Twice a year, the Oblates conduct retreats at the prison that involve about 40 prisoners at each retreat.

The retreats are led by Fr. Salvador Gonzalez, O.M.I. and Fr. Mark Dean, O.M.I. both of whom minister at King’s House Retreat Center in Belleville, Illinois.

The “Kairos in Prison Retreat” is a Christian-based retreat specially designed to help the incarcerated meet other Christians in the same situation, share their faith and grow their relationship with Christ and each other.

“People in prison desperately want an opportunity to find Christ and to experience something new in their life,” said Fr. Salvador.  “I know one gentleman who was on a waiting list for the retreat for eight years.  When he finally got his turn, he was so grateful for the opportunity to experience Jesus.  He became a different man.”

Joint Statement of Commitment
A new mission for the Oblates