Celebrating the 175 years of Oblate Presence on the Island

Missionary Oblates of Mary Immaculate in Sri Lanka have proclaimed a Jubilee Year in commemoration of the 175 years of Oblate presence in the country.

Over a hundred Oblates from both Provinces, Jaffna and Colombo, gathered at De Mazenod Chapel, Columbuthurai, Jaffna and celebrated the Holy Eucharist together in thanksgiving to God, on the 14th of February, 2022.

Bishops of the dioceses of Jaffna, Trincomalee, Batticaloa, Mannar, Vicar Generals, Episcopal Vicars, Provincials of other Congregations, Priests, Religious, and many lay faithful graced the occasion.

Under the theme “Let us write a new page of Gospel with Mazenodian creativity and commitment”, the Oblates of both the provinces have organized various activities to be held throughout the Jubilee Year.

Arrival of the Oblates

The Catholics in Sri Lanka, during their persecution under the Dutch, lived for 30 years without the presence of Catholic priests, until the arrival of St. Joseph Vaz in 1687 from India. Although the Catholics gained religious freedom after the arrival of the British in 1802, they could not readily expect many Catholic priests from India or from Europe. Such a situation compelled the Italian Oratorian Bishop Orazio Bettacchini, the new Vicar Apostolic of Jaffna, to go to Europe in 1845 in search of missionaries to serve the Catholics in the Vicariate of Jaffna. 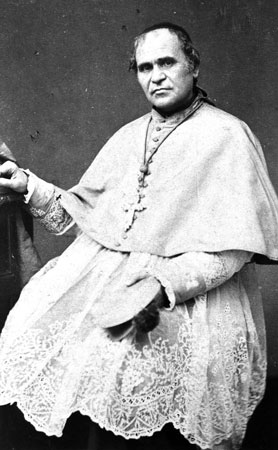 Having failed to obtain help from the Congregation of Propaganda Fide in Rome, Bishop Bettacchini went to France. During his time in France, he met Bishop Berteaud of Tulle who told him “Go to Marseilles: there is a bishop who is founder of a small congregation, but has a heart as big as that of St. Paul: as big as the world. Go there and tell him that it is to save poor souls, the poorest souls, and insist on this, it is an irresistible word.”

Bishop Bettacchini did go to meet Bishop de Mazenod and his entreaty was in these words:

“Monsignor, I assure you that it is a matter concerning poor souls, very poor, the most abandoned, the most unfortunate on earth. Have pity on them and give them some missionaries. If your Oblates do not come, they will perish. In the name of Maty Immaculate save them!”

It is recorded that “Accompanied by three of his ‘confreres’ Frs. Joseph Alexandre CIAMIN, and Louis Marie KEATING and the Lay Brother Gaspare DE STEPHANIS, and with Mgr. Bettacchini as the head of the missionary caravan, Fr. Semeria embarked at Marseilles on the 21st of October, 1847. Another three weeks were spent crossing the Indian Ocean and on the 28th of November 1847 the party disembarked at Galle, Sri Lanka, which was, at the time, the port of call for vessels. Mgr. Bettacchini left Colombo on the 2nd of February, 1848, taking along with him his Oblate missionaries to Jaffna”. (Phillips Jesuthasan, Gleanings from the Oblate mission field in Ceylon).

Wishes from the Superior General

Fr. Louis LOUGEN, the OMI Superior General sent his wishes and blessings on the occasion of the inauguration of the Jubilee Year. In his letter to the Oblates in Sri Lanka he recalled the words of St Eugene written in 1847:

“What a field of labour is opening up before us … in the most beautiful country of the world … I foresee that one day this great island will become an endowment which our Congregation will sanctify entirely.”

Fr. Lougen also wrote: “On your invitation for the 175th Jubilee Year, you have a theme inspired in the words of Pope Francis to the members of the 36th General Chapter in 2016: …[M]ay the Lord allow you to write new pages that are as evangelically fruitful as those of your brothers who, over the past 200 years, have borne witness, sometimes, even with blood, to that great love for Christ and for the Church.  You have expressed the desire that you want to write new pages of evangelization with the creativity and commitment of St. Eugene.”

“In light of the theme that you have chosen for this year, I pray the Lord to bless you with a three-fold grace: The grace of conversion, the grace of Mazenodian creativity, and the grace to be the most united family on earth” he further stated.

Journey with the Lord

At the end of the Holy Eucharist everybody joined in praying the Jubilee Prayer. Fr. Eugene BENEDICT, Provincial of Jaffna Province, and Fr. Roshan SILVA, Provincial of Colombo Province were aptly supported by the Oblates and associates of both the Provinces to bring the day’s proceedings to a successful completion.