On the occasion of the Anniversary of the beginnings of our Congregation, on January 25, 2022, the General House was embellished with two pictures of arguably the two most well-known Oblate giants in history: Eugene de Mazenod and Bl. Joseph Gerard.

They are located in the vestibule in front of the main staircase, a strategic place, since it connects the chapel with the corridor leading to the community hall and the International Roman Scholasticate and, on the other side, to the Refectory of the community and the entrance. In short, they are in the heart of the house.

The paintings are impressive for their large dimensions, about 130×165 cm and are signed (“G. D.”), which made it necessary to place them on a wall large enough to be able to contemplate their beauty, for they are of great artistic quality. They were donated to the General Postulation by the Oblate community in Cagliari (Sardinia), although they were originally made for the church in Maddaloni, Italy, which the Oblates left some years ago. This was the moment when they were transferred by the Oblates to the one in Cagliari (Sardinia, Italy). 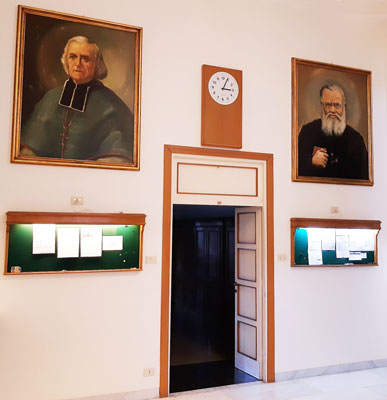 According to the research made by the Postulation, the author is Gennaro Dinacci, from Naples, who perfected his technical and artistic training with the study of the great masters of painting during the years he worked at the National Museum of Capodimonte and at the Royal Palace of Caserta and as a restorer of works of art in Naples, Caserta and Salerno. He currently has a workshop-laboratory in the province of Fondi-Sperlonga.

The history of these paintings is linked to Fr. Ottorino Casarotto, who was parish priest of Maddaloni for 18 years. Dinacci had already restored some canvases in the church. The relationship with Fr. Ottorino led him to a profound spiritual change and, in gratitude, he expressed the desire to do something for the church. Ottorino suggested that he painted a large painting of Merciful Love, still present today in the church of Maddaloni.

At that time, Dinacci went through a dramatic series of surgeries that brought him to the brink of death. Ottorino, who went to give him the last sacraments, told the Lord in prayer that if his painter died there would no longer be such a painting in his honor.

The Lord’s Providence was good enough for him to recover and so Dinacci was able to paint the picture. As a result of this relationship between the Oblates and the painter, these two paintings were born, which today belongs to the General Postulation and can be enjoyed by all visitors to the General House.