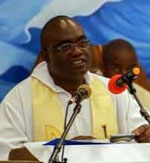 The General Formation Committee (GFC) annual meeting which was supposed to take place in Poland but could not due to Covid restriction was held virtually with all the full members in attendance from February 28 to March 2nd.

The meeting though virtual was a very good gathering and fraternal through sharing and sometimes some laughter. Fr. Ngoka animated the group well and expressed gratitude for those who have been serving on the committee for some time now as well as welcomed the new members. Everyone felt welcome and at home virtually. On the order of business the meeting shared consolidated reports from their formation houses in the regions respectively as well as sharing how vocation ministries and ongoing formation activities are going. This sharing brought out a lot of experiences of success and various challenges; we can however remain positive that a lot is going on in our congregation and various regions in particular. The meeting also focused on the series of the ongoing formation workshops for post-novitiate formators since last year. Amongst other theme shared included: interculturality programs in our formation houses, status quo of our ongoing formation practices in our units in preparation for the virtual ongoing formation workshop from 20th to 22nd of June, 2022, formation of brothers in our units, guidelines on the protection of minors and vulnerable adults in formation houses, the importance of regency experiences in oblate ministries, and the challenge of preparing missionaries (Formandi) especially in response to the 2010 and 2016 Chapter calls for the new faces of the poor in today’s world, the novena prayer for Oblate Vocations (21-29 May) was reviewed for this year. The meeting also looked at two important events in our Congregation ahead of us; the 200 years of Oblate Madonna (Our Lady) to be celebrated on August 15, 2022 and the 200th anniversary celebration of the approval of our Constitutions and Rules since 1826.

The meeting was on March 1st graced with the presence of the Superior General who addressed us to share his views. The General was grateful to the members of the committee and the work that is being done so far, considering the formation work is not easy and needs oblates who can give of themselves to this ministry. He urged us to live our fourth vow of perseverance in light of the fact that we can easily be discouraged and be cynical about our ministry and that perseverance is indeed “constancy in love”. In all that we do we must remember that it is the “wisdom of the spirit” that urges us on. The General continued by stating that God is able to do some much as in St. Paul’s letter to the Ephesians (3:20), “Now to him who is able to accomplish far more than we ask or imagine, by the power at work within us”. He urge us to think of formation as a long term commitment, to continue to animate and stimulate our regions creatively while at the same time observing the virtues of humility and calmness in all circumstances.

In preparation of the 37th General Chapter, we shared some thoughts and reflected on Oblate missionary formation in the context of today’s world with its hopes, challenges and opportunities. As a committee for formation we encourage Oblates in initial formation to participate in the preparations and celebration of the Chapter in various ways: through prayers, reflections on the Chapter theme – “Pilgrims of Hope, in Communion” by embracing formation as a true experience of pilgrimage, in communion the whole Oblate world and embracing our role as disciples of hope.