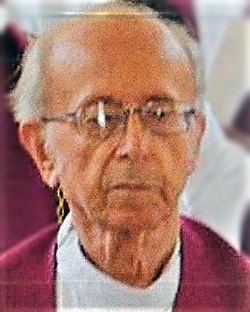 Georges LAUDIN was born in Paris on January 15, 1926. In 1944, although still at war, France was liberated from Nazi occupation. Georges, 18, decided to dedicate his life as a religious and missionary. He was admitted to the novitiate of the Missionary Oblates of Mary Immaculate at Pontmain; together with him was the future Blessed Martyr Jean Wauthier. Georges made his first vows on October 15, 1945, 15 days earlier than Jean. The two friends met again at La Brosse-Montceaux to study philosophy, then theology at Solignac. They made their lifelong Oblation on December 8, 1949, and were ordained priests, again in Solignac, on February 17, 1952.

By that summer, the two went on different missionary paths. In October, Fr Jean Wauthier left France for the Lao Mission; as for Fr Georges Laudin, he had received his first obedience on March 8, 1952 for the Province of France-North (Paris). There, he was destined to preach parish missions, also known as “Popular Missions.”

At that time, between 1950 and 1970, many Oblates in France took part in renovating this age-old concept of home missions, to organise “General Missions” for large urban areas. Fr Georges was one of pioneers. Thanks to his outstanding intellectual qualities and apostolic zeal, he gradually assumed a leadership role, for example for the General Mission of the Rouen conurbation. He penned a 30-page article on the concept of Regional Missions, published in 1961 in the periodical Missions OMI; in it, he puts to good use his knowledge of sociology. The present-day concept of “New Evangelisation” was not yet born, but the Oblates were prepared in advance for it…

However, General Missions were not a kind of magic recipe. After 1830, Eugene de Mazenod and his companions had to innovate, moving away from their favourite method. In 1965-1966, after the Second Vatican Council, the Oblates were again at a turning point. Georges Laudin was appointed in charge of preparations for the General Mission of the Strasbourg Metropolitan Area, a project to which many religious institutes adhered… But the project never took off and had to be abandoned. 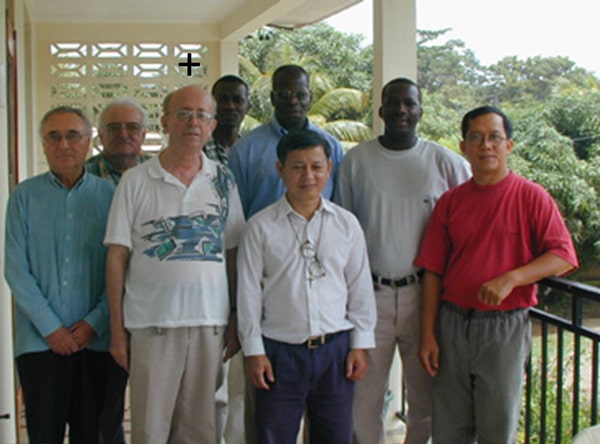 Georges had no time to cry about the past or on lost opportunities. In this same year 1965-1966, three great events marked his life:

Several other events marked his term as Provincial. On December 27, 1967, he represented the Congregation at the memorial mass for his friend Blessed Jean Wauthier (+ December 16, 1967), presided over by the Archbishop of Cambrai. In 1970, he signed a 38-page article on the development of the Congregation, published in Spanish in the periodical Missions OMI. The following year, his long report on the Province of France-North was one of the important documents in preparation for the 1972 General Chapter; he penned also two reflection articles, published in the same journal, one on “small communities” of Christians—that would later be called “grass-root communities”—, the other on the challenges facing the 1972 General Chapter.

After that Chapter, Georges Laudin, with all his intellectual and spiritual qualities, became once again a rank-and-file Oblate. On November 7, Michel Berche succeeded him as Provincial of France-North; Georges, who spoke English fluently, was assigned to the island of Jersey (a British Crown dependency), where the French Oblates were in charge of the migrant workers.

At the end of September 1977, together with Yves Chalvet de Récy, he opened an inter-provincial house in Ste-Foy-lès-Lyon for the pastoral care of young people. Georges was appointed high school chaplain. He and Yves began welcoming in their ‘Chavril’ community students who wanted to share their faith with others in a new way. Very quickly, they opened the doors to the presence of foreign students; then, in a third phase, they welcomed female students as well. Since then, Chavril has allowed Oblates and young men and women to share community life together for a year or two, to meet, discover the intercultural dimension, see « how the neighbour works », and sometimes rub shoulders together because international life is not necessarily easy, not to mention each one’s personality!

In September 1989, Georges Laudin was appointed superior of a new Inter-Provincial Scholasticate, based in Lyon, 36 rue de Trion.

In October 1993, the three provinces of France began their process of their unification. Georges Laudin received the new assignment of “Provincial of France.” He was in charge of the unification proceedings and of initial formation, and presided over the discussions of the group of Provincials…

That same year, 1993, together with the Province of Haiti, he founded the Mission of French Guiana, a territory where French Oblates were already working with Hmong refugees.

In 1995, Georges Laudin set out again for Asia, in his quality as Provincial of France. Guided by Fr Jacques Nguyễn Văn Thơm, he visited different parts of Vietnam, all the way to Hưng Hóa, where he came into contact with the Hmong. His report stressed the need for the presence of Oblates here; but at the same time, he recognised the great difficulty to establish an Oblate Mission in Vietnam. He encouraged Oblates of Vietnamese origin, or having ties to the country, to stay in touch and be available to help, depending on the circumstances.

In September 1996, at the end of his term as Provincial, Georges once again returned to a basic missionary life: he received an obedience to the Guiana Mission. There, he worked tirelessly with the Oblates and with the diocese; he specialised in the formation of the laity, and became Vicar general for many years. In 2003 he wrote a full report on this Mission.

In 2005, Georges Laudin, now 79, took charge of Mirza, the poorest parish in the Cayenne region. The parish, roughly 20 000 inhabitants, was home to many youths living on the streets, and a place of thriving prostitution and drugs activity… His closest collaborator was an Oblate scholastic from the Province of Cameroun, who had come to French Guiana for a two-year internship. Georges Laudin, in addition to the care of this parish, was also in charge of the catechumenate and formation of the laity for the whole diocese.

In 2012, Georges turned 86: the first warnings concerning his health appeared. In 2016 (90 years old!), these problems had become worse: hearing loss, and the gradual loss of his personal autonomy: the time was coming to go back to continental France. On May 29, 2018, he was temporarily welcomed by the Pontmain community, and a few weeks later transferred to a nursing home in Fontenay-sous-Bois, just a few steps from the Oblate house. Here he was cared for by the Sisters of Saint Francis of Assisi, along with Brother Samuel, a Pakistani Oblate who is a nursing assistant at the institute. Since Georges Laudin’s family is still based in Paris, he also received frequent visits from his nephews and nieces. However, his mind had started drifting into another world…

On April 21, 2022, he departed for Our Father’s Home, joining the heavenly family of Saint Eugene de Mazenod and the Blessed Oblates, where he is now reunited with his friend Blessed Jean Wauthier. — R.I.P.