Since 2021, a group of 21 widows and single mothers have joined ‘OMI Charity’, the charitable arm of the Oblate missionaries in Yen Bai province, northern Vietnam, to serve “chao”, a traditional breakfast, all Tuesday mornings to nearly 250 patients in two hospitals in the town of Nghia Lo. A total of eight groups serve patients from many hospitals in Lao Cai, Phu Tho, Son La and Yen Bai provinces every week. The region has a dozen ethnic groups.

Luong Thi Hien, a 60-year-old non-Catholic Vietnamese woman of Thai ethnicity, prepares meals with five other women in the parish house of Nghia Lo every Tuesday morning for patients at a local hospital in the province. of Yen Bai, in the north of the country. In a loud voice and dressed in a blue t-shirt in the colors of the charitable group of Oblate Missionaries (OMI), she then knocks on the doors of the hospital to invite patients and their loved ones to receive the chao , a traditional breakfast with meat, fish and vegetables.

Nearly 250 people benefit from it every week in the General Hospital and in a nearby private hospital. “I am so happy to work with other women to lovingly serve nutritious meals for poor patients, including members of my ethnic group, so that they can recover quickly and return home,” said Luong Hien, who joined the OMI Charity group in June. The region has a dozen ethnic communities.

Giang Thi Sinh, a Hmong woman from Suoi Bu village in Van Chan district, said her three-year-old daughter, who is suffering from malnutrition caused by worms, was treated in hospital for ten days. “We are happy to have food from the group. We don’t know how we would have done without it, because we don’t have any money,” she says, adding that her family survives by selling maize and vegetables collected in the forest. 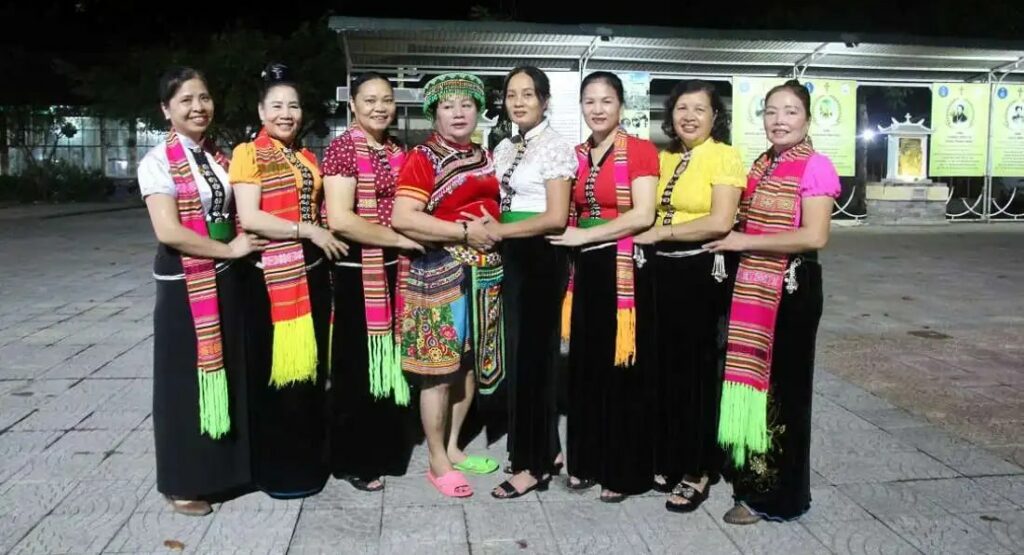 Volunteers in traditional costumes at the Shrine of Our Lady of La Vang, Quang Tri province.

For her part, Luong Thi Hien, a mother of two, whose husband died fifteen years ago and whose children are married and left home, says that members of the charity group come to see her regularly to support her, and she herself teaches them traditional dances. She also sells vegetables and the culinary specialties of the indigenous villagers in a local market, and she also sends donations to the group, while volunteering to clean the houses of her sick neighbors.

The leader of the group, Marie Tran Thi Kim, explains that it was founded in 2021 by the Oblate missionaries and that today it has 21 women, including members of the Muong and Thai communities. They belong to the three parishes of Nghia Lo, Vang Cai and Vinh Quang, and half of them are non-Catholic. Some have also rediscovered their faith within the group after becoming estranged from the Church. Marie Kim, 64, said the members of the group, who are widows and single mothers, are divided into four shifts to take turns serving the chao to patients.

They and local benefactors cover the cost of the meals up to 4 million dong (170 euros) per month. A local volunteer transports the chao to the hospital with a van. Marie, a mother of two, adds that non-Catholic members also sing hymns and buy rosaries to give to their friends. “We are intertwined with each other through culture and faith, and we become united through charitable work.” They also visit parishes and religious sites, organize traditional dances, sing hymns and present their food program to others in order to raise funds.

At the beginning of August, they also went on a pilgrimage to the Marian shrine of Our Lady of La Vang, in the central province of Quang Tri. They gave a Xoe dance there , from a Thai ethnic group. This dance, recognized by Unesco as an intangible cultural heritage of humanity last December, reflects the vision of the world of Thai villagers and the wishes for happiness, health and prosperity. They also met Bishop Alfonse Nguyen Huu Long, Bishop of Vinh, who served as Auxiliary Bishop of their home diocese of Hung Hoa. The bishop confided that he appreciates their service and he gave them a donation for the meals of the patients.

OMI missionaries from Lao Cai province founded a first group of volunteers in 2019 to serve chao to destitute patients at a public hospital in Bac Ha district. To date, a total of eight groups serve breakfast to nearly 250 patients per week, in many hospitals in Lao Cai, Phu Tho, Son La and Yen Bai provinces.